Dead teenager number seven. With the rash of suicides at my school, I've been shipped off to my dad's Wyoming ranch for “my own safety.” My mom worries I'll be next—another depressed teenager whose blood will end up on the train tracks. But she doesn't know my secrets...or what I did.

Everything has changed at the ranch since I was there last. The staff is gone, and there aren’t any visitors. The place is struggling, and ALS is destroying my dad. The one bright spot in this mess is his new—and only—ranch hand, Jake. He’s gorgeous, cheerful, healthy and sane. Shadows don't haunt his eyes and eat away at him in the night.

But the ranch and Jake can't save me from the darkness inside, or the knowledge of what I've done. This time, it's up to me to save myself... 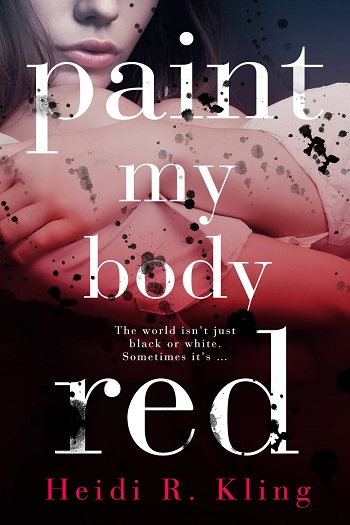 Erica – ☆☆☆☆☆
I wasn't sure what to expect when I began Paint My Body Red. I enjoyed the storyline – the location. Going against the norm, a girl who was born in Wyoming, raised in California, returns to her roots for a few months before she ventures to college on the East coast. Paige says goodbye to the demons of her past while giving her final goodbyes to her father, all the while reconnecting with the land and finding love where she least expected it.

My emotions ran the gamut from smiling to bawling my eyes out, and then back again in a roller coaster ride of emotions. I don't wish to ruin it by giving a play-by-play. But I will say there was no insta-love, no cheesy eye-roll-worthy teenage girl obsessed with boys inner monologue. No overplayed and overused tropes of jealousy and miscommunications to take the place of real storytelling. Fluid, the book flowed as reality.

Paige: a strong female lead. A good role model. Neither whiny nor perfect. Flaws forged the character into someone who acted and reacted most certainly human. As an eighteen-year-old, Paige doesn't fall into the trap of being bossy/TSTL/know-it-all/helpless yet does-it-all. Anti-cliché. The girl was a well-rounded character with traits that followed human nature.

Adult readers may find Paige's earlier actions hard to swallow, but one must remember what it felt like to be newly 18. In my 30s, I'm just now able to recognize things I would have been too blind to see in my late teens. Be empathetic while reading this very tough subject matter.

The parents were flawed as well – all the side characters were, but not overtly so. Even those who could have been vilified were painted with an empathetic brush. There was no right or wrong, only consequences and life lessons worth learning.

My only partial negative, I had difficulty engaging with the book in the beginning. Not the Now sections. Then was difficult for me to grasp at first. The flow was a bit jarring, the Now | Then | Now | Then in short bursts, sometimes only a half a page in a time-frame. I was never confused as to what was happening when. But by the middle of the story, the flow eventually evened out and became fluid.

I enjoyed Heidi R. Kling's voice, storytelling, even with the dark subject matter. I'd recommend it to those who need a highly emotional read, but be forewarned to keep the tissues handy. Anyone who needs a warm, cuddly read, please come back when you're emotionally ready.

Would I read more by this author? I intend to see what other stories Kling has written.

Suggested Young Adult age-range: mature 14 – 16 due to dark content, suicide, grief/mourning, and sexual content. More told than shown, but that didn't dampen the impact of the moral. Parents, gauge your child's maturity level, but I do believe it's an appropriate and necessary read to broaden all minds.

Heidi Kling writes contemporary novels about young women in fantastic situations and fantasy novels set in our contemporary world. Her bestselling Spellspinners series is a popular serial series leading with Witch's Brew about estranged but destined witches and warlocks. The Gleaning, Devil's Frost and Beautiful Monster are out now with more adventures to follow. Her beloved debut contemporary, Sea, set in the aftermath of the tsunami, was a Summer 2010 IndieNext Pick, Northern California Book of the Year finalist, Gateway Readers Choice Award winner and Scholastic Readers Pick.

Her forthcoming contemporary novel, Paint My Body Red, is a mysterious romance about a haunted girl escaping the pressures of the Silicon Valley after her involvement in a series of "contagious" teen suicides at her prestigious high school. As she learns to face the past while dealing with her father's dilapidated Jackson Hole, Wyoming ranch and withering health, she leans on magnetic ranch hand Jake. Paint My Body Red launches with Entangled Teen Fall, 2015.

After earning her MFA in Writing for Children from the New School, she returned to the Bay Area where she lives with her husband, two children and the fluffiest accidental puppy mix ever, Sailor Lily, just over the coastal mountains from the sea.

Reviewers on the Wicked Reads Review Team were provided a free copy of Paint My Body Red by Heidi R. Kling to read and review.
Posted by Wicked Reads at 4:00 AM