Mira MacDonald, a proud lesbian, and Rob Stevens, gay but in the closet, don’t have it easy at their high school. Luckily they’ve always had each other and their close friendship to rely on, and it makes facing the bullies a little easier. At least for Mira. Rob is also struggling with untreated depression, and lately, Mira’s sweet and funny friend has become increasingly paranoid, suspicious, and obsessed with death.

Things go even further downhill when Mira begins dating Talia Acevedo and Rob becomes convinced Talia is driving a wedge between them. Mira knows Rob needs her, but his jealousy and irrational fears are becoming harder to balance with her relationship with her girlfriend. Add to that escalating harassment from bullies, and Rob is being driven closer and closer to an edge Mira worries she can’t pull him back from.

But she has no idea how serious the situation is until, during one of their midnight chats, Rob reveals he has a solution—a desperate final measure to put an end to the bullying… permanently. This time, trying to help her friend and save the school could cost Mira her life.

Rob has been the target of school bullies for years and his mental health is deteriorating. The adults in his life fail him. He doesn't like Mira's girlfriend and this adds pressure to their friendship.

This story shows us the serious damage that bullying can do to a person's mental health and that the bullying doesn't just hurt the person being bullied. I found myself wondering what I would have done in Mira's place. It is not hard to see how Rob ends up coming to the conclusion he does.

I'm not sure I'd say I enjoyed Midnight Chat but I would say it is a good book and it is good to see stories like this one bring this serious issue out in the open.

Reviewers on the Wicked Reads Review Team were provided a free copy of Midnight Chat by Jo Ramsey to read and review.
Posted by Wicked Reads at 12:29 PM No comments:

Weddings, Crushes, and Other Dramas by Emily McKay

Falling in love with the best man wasn’t on the program.

Willa is happy to be the maid of honor in her dad’s upcoming wedding to uber-celeb Mia McCain. Not as happy about the best man being her soon-to-be stepbrother, the infuriating—and infuriatingly gorgeous—Finn McCain. Every time their paths cross, the attraction simmering between them grows a little harder to ignore. Willa knows all about guys like Finn—they only want what they can’t have. What’s between them isn’t real.

Finn has never felt anything more real than what’s developing between him and Willa. Sure, her dad warned him to steer clear, but it’s not just about forbidden temptation. He’s determined to prove to Willa he’s not going anywhere—and that happily-ever-after will always be worth the risk.

Disclaimer: This Entangled Teen Crush book contains a wedding so crazy it’ll make you laugh, a stepbrother so hot he’ll make you swoon, and a heroine so real she’ll make you cry. 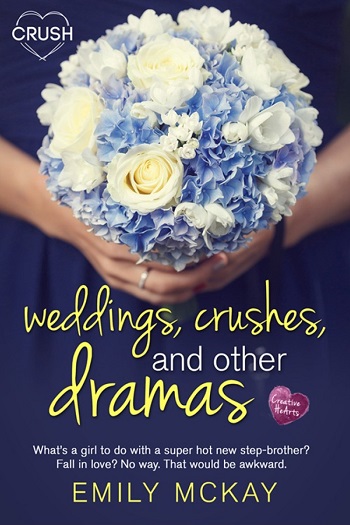 Erica – ☆☆☆☆
Weddings, Crushes, and Other Dramas most definitely cannot be read as a standalone. The Creative HeArts series features four couples written separately by four different authors, all intersecting in the same universe. Willa and Finn are couple #2 in the series, with the first book of theirs being book #2 (this is their conclusion, but also the 6th in the series). Complicated? Yes. So if you're picking this book up to read as a standalone, don't do it. Go back to the beginning.

As a big fan of the series, I've been patiently waiting for more of Willa and Finn's story. Finn has been a large focal point by all the authors in all their books – he's a heartthrob, but also a strong friend to have in your corner. The reader can feel how appreciated Finn is by the creators of the series. Willa was lying just beneath the surface of the other books, seen and often times discussed, but never a scene-stealer. The couple are the perfect balance for one another.

Truthfully, this book had me wanting to reread their first novel before this book, in order to get the full impact, as they are my favorite couple of the series. May do that soon. Enemies with a push-pull romance, mixed with the taboo of the impending doom of becoming step-siblings. Their relationship is the height of forbidden romance. Angsty deliciousness.

If you're reading this review, debating if you wish to buy a copy, you either didn't heed my warning to check out book one in the series, or you're a series veteran. Either way, I'm not going to spoil the plot points. If you're reading this series, by book six, you know all the major players and their stories.

In a nutshell, Emily McKay has a fluid writing style, with characters that exhibit the emotional maturity befitting their age group, with realistic reactions/actions. Dual-POV, we hear both sides. Finn is our brooding, tortured artist, struggling with a conflict of conscience. Willa is basically in denial, closing herself off because it's easier to think Finn a player. As a grown woman, I wanted to shake Willa a few times, give her a piece of my mind, and set her straight. Then I wanted to give Finn a hug and some advice on how to deal with a teenage girl. Both had realistic reactions to the situation they were placed in, which makes for yummy reading.

As a big fan of the author and series, the reason I couldn't hand out a perfect 5-star is two-fold: I wished the story was slightly longer, and I'm well-written novella's biggest fan. A few more pages to tie up loose threads to create solid character building. Also, the adult in me appreciated that this is a young adult novel, keeping it clean for the younger readers. However, the ex-teenager that I used to be, knows that teenagers are not saints. So my only complaint on the not-so-realistic front is the lack of hormonal responses from our kids. Nothing explicit, simply true-to-life. We have a pair of step-siblings in love, living in the same house, so the reader missed out on a lot of tension buildup without any payoff. There was an opportunity for a few heart-pounding moments, which would have been comical. But that's just what I felt was 'missing' from the story.

I look forward to book seven, as well as Emily McKay's next book. 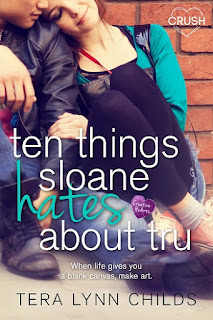 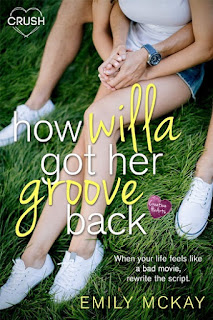 For reviews & more info, check out our How Willa Got Her Groove Back post. 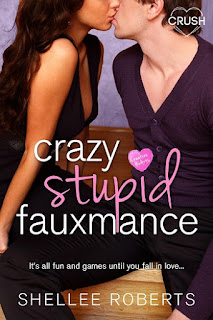 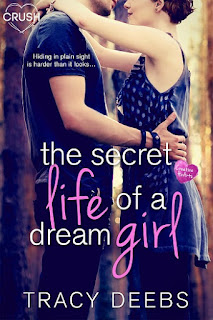 For reviews & more info, check out our The Secret Life of a Dream Girl post. 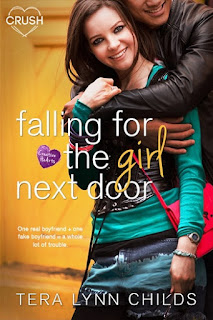 For reviews & more info, check out our Falling for the Girl Next Door post.

Emily McKay is a life-long fan of books, pop-culture and anything geeky. She has a black belt in Tae Kwon Do baking cookies. She lives in central Texas with her husband, kids, two mildly-psychotic dogs, a three-legged cat and eleven chickens.

Reviewers on the Wicked Reads Review Team were provided a free copy of Weddings, Crushes, and Other Dramas (Creative HeArts #6) by Emily McKay to read and review.
Posted by Wicked Reads at 12:00 PM No comments:

Any Boy but You by Julie Hammerle

Elena Chestnut has been chatting with an anonymous boy late into the night. It’s a very You’ve Got Mail situation, and she has no idea who he is. He can’t be Oliver Prince, hot-and-bashful son of the family running the rival sporting goods store. Their fancy sales strategies are driving Elena’s family out of business. Elena’s mystery boy has teamed up with her in their latest sales strategy, an augmented reality game, to help her win the grand-prize plane tickets. Money’s so tight Elena’s going to miss senior year spring break with her friends if she can’t win this game.

The girl Oliver's fallen head-over-heels for online had better not be Elena Chestnut. She's his angry, vindictive Latin tutor, the daughter of his dad’s business rival, and the one girl he’d never even think of kissing. She’s definitely not his online crush, because that girl is funny, sweet, and perfect.

When Oliver asks to reveal their names at the Valentine’s Day dance, their IRL relationship will either ruin what they have online, or they’ll discover just how thin the line between love and hate really is.

Disclaimer: This Entangled Teen Crush book contains swearing, snowball fights, and sexual tension that could melt the North Pole. Read at your own risk. 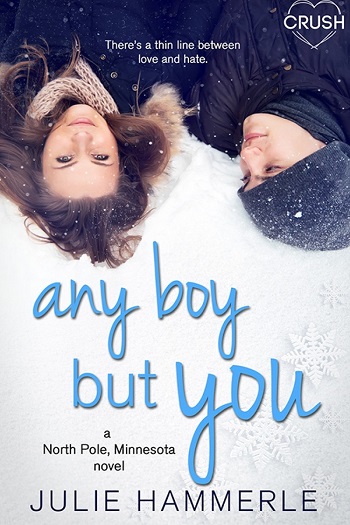 Erica – ☆☆☆
As an adult reader, I'm giving this title three stars, but I do believe younger readers will appreciate it more. Teens will no doubt find the Pokemon Go angle addictive, as well as the enemies-turned-crush angsty sweet.

Julie Hammerle's writing style flows fluidly, the pacing quick, without over-description, written in a way to engage both younger and older readers without confusion or being 'dumbed' down.

Elena and Oliver's families own rival sporting goods stores. Enemies come head-to-head when Elena has to tutor Oliver. I felt both Elena and Oliver were written authentically for their age-group, realistic in their ‘voice,’ and were a good fit for one another.

The kids were told to be enemies by their families, and this tainted their interactions and thoughts of the other. They begin chatting with each other via a game app and don't realize it's their mortal enemy. The kids connect, find they truly like each other, but it all gets muddled up with the family feud. This is a perfect recipe for angsty dramatic yumminess. Some great interplay back and forth between Elena & Oliver – banterific.

As I stated above, younger readers will eat this book up, but as an older reader, it was hard to swallow the 'reason' as to why there was a rivalry – a bit too over-dramatic, unrealistic, and irrational. Immature on their families' parts, which is a no-no for me (adults not behaving maturely). Just let it go, not infect your children.

Recommended to young adult readers looking for a book where enemies turn into each other's crush.

Julie Hammerle is the author of The Sound of Us (Entangled Teen, 2016) and the North Pole, Minnesota romance series (Entangled Crush, 2017). She writes about TV and pop culture for the ChicagoNow blog, Hammervision, and lives in Chicago with her family. She enjoys reading, cooking, and watching all the television.

Reviewers on the Wicked Reads Review Team were provided a free copy of Any Boy but You (North Pole, Minnesota #1) by Julie Hammerle to read and review.
Posted by Wicked Reads at 7:00 AM No comments: