The Dating Debate by Chris Cannon

Nina Barnes thinks Valentine’s Day should be optional. That way single people like her wouldn’t be subjected to kissy Cupids all over the place. That is, until her mom moves them next door to the brooding hottie of Greenbrier High, West Smith. He’s funny, looks amazing in a black leather jacket, and he’s fluent in Harry Potter, but she’s not sure he’s boyfriend material.

West isn’t sure what to make of Nina. She’s cute and loves to read as much as he does, but she seems to need to debate everything and she has a pathological insistence on telling the truth. And West doesn’t exactly know how to handle that, since his entire life is a carefully constructed secret. Dating the girl next door could be a ton of fun, but only if Nina never finds out the truth about his home life. It’s one secret that could bring them together or rip them apart.

Disclaimer: This Entangled Teen Crush book is not for anyone who has to get in the last word, but it is for all book nerds, especially those who live next door to so called unapproachable gorgeous guys. There’s no debating the chemistry. 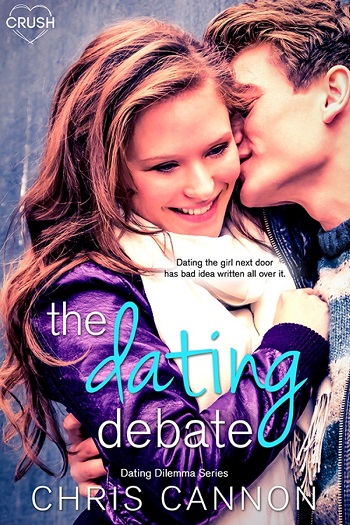 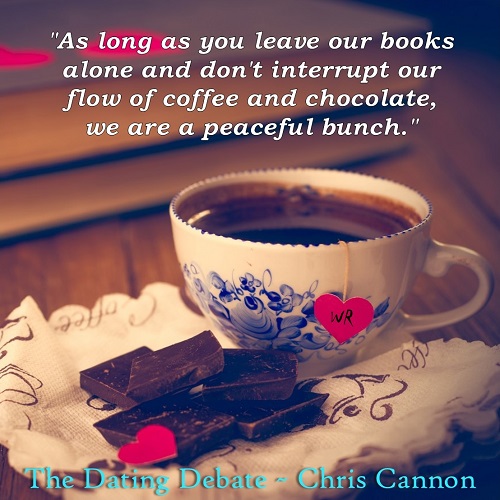 The Dating Debate is sure to please both young adults and those young at heart. Zany, lighthearted, charming, angsty, and swoon-worthy, I was hooked from page one. There was also surprising depth, with intriguing familial background, instead of how most books in the young adult genre have absentee parents, leaving an opening for unlimited interactions. In this case, the parents were both supportive yet also the obstacle.

Another plus in my book was how supportive the side cast of classmates and friends were, with no scheming to inject themselves into the budding relationship. No Mean Girl drama, all of it was realistic, character-building situations.

Nina and West are neighbors, with West's father as Nina's landlord, which adds a few bumps along the road.

Nina is absent a filter, a truth-telling debater, after the betrayal her family was dealt. While she may be cynical when it comes to romance, she's the best friend anyone could ever find. Caring and compassionate, a natural caregiver. She's also a book nerd after my own heart.

West is a brooding, self-sacrificing swoon-worthy hero, who's only made more appealing by the fact that he's always reading a novel. He puts his father and mother's wishes and needs before his own, and this is both heartbreaking and sweet.

Nina and West spar for the entirety of the book, whether they are agreeing with one another, arguing semantics, or using it as age-appropriate foreplay. This witty exchange was both comical and blush-inducing.

Favorite quotes, because it felt like they were taken directly from my head. [Blog Note: The quotes have been turned into the teasers included in this post. Enjoy!]

Young Adult age-range: 13+ kissing and mental illness in a parent. 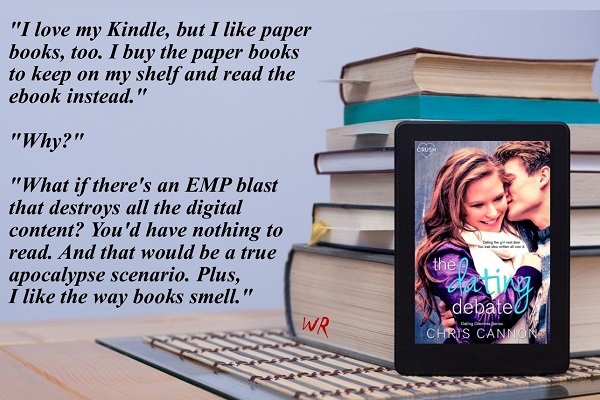 Reviewers on the Wicked Reads Review Team were provided a free copy of The Dating Debate (Dating Dilemmas #1) by Chris Cannon to read and review.
Posted by Wicked Reads at 6:58 AM No comments: