Teen detectives Wyatt and Timothy are determined to find out what happened to a group of boys who disappeared years ago—but surviving the mystery might be as challenging as solving it.

To make ends meet, Wyatt works construction instead of attending school, and it’s in an old house he’s gutting that he finds a collection of articles about a missing boy. Wyatt knew Bobby LaFleur before he disappeared, and this new clue stirs up Wyatt’s old memories.

Sheriff’s son Timothy Mitchell can’t resist a challenge—or the chance to show his dad he’s more than capable of working in law enforcement. Together with Wyatt, he investigates the disappearance and learns Bobby isn’t the only victim—and that Wyatt and Bobby were more than friends. As the case grows darker and more twisted, the connection between Wyatt and Timothy deepens. But the secrets they uncover could get them killed. 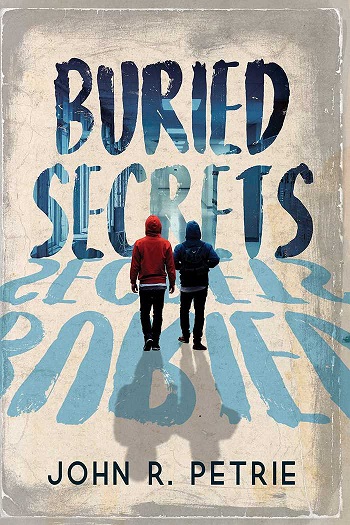 Veronica – ☆☆☆
Buried Secrets is a young adult novel in which local teen Wyatt asks the sheriff’s son, Timothy, for helping in finding out what happened to his friend, Bobby, who disappeared four years prior. Timothy wants to be a cop and agrees to help Wyatt try to solve the mystery, and also hopes to impress his dad.

This story mixes teenage romance and mystery well and also deals with the family lives of these two young teens. I loved the family dynamics we see with Timothy’s family. Timothy is openly gay, and he has accepting and supporting parents. Wyatt’s home life is the complete opposite with a drunk, neglectful mother who is full of prejudice.

On the mystery, as a reader, with a few clues I figured out what had likely happened early on but I enjoyed seeing Timothy figure it out and watching the story unfold. There is a good helping of danger and suspense to keep you a bit on edge right through the story. On the romance side of things, I liked the age appropriate romance. These guys are smart enough to realise they are still young and they don’t go rushing into things they might not be ready for.

I really enjoyed Buried Secrets. It has a good, fast pace and I had a good time reading it. A solid three stars from me.

John R. Petrie grew up in Boston and now lives in the Bronx, NY. Almost his entire working career has been spent around books, from his first job in the town library to more than twenty years bookselling in one of the biggest bookstores in the US. He’s also worked for the Housing Works thrift stores in NYC, Valiant Entertainment Comics, and is now a bookstore manager, which gives him too much access to books and not enough time to read them.

He’s had stories published in True Romance magazine, had a play he wrote produced at his college, acted, danced, and was nominated for a Barrymore award playing Belize in Angels in America.

He stays up too late, eats too much junk food, and has been reading Wonder Woman comics for over forty years.

He is very, very happy to be published by Harmony Ink Press. He hopes to continue writing stories which make people smile.

He likes to hear from people, so say hello.

Reviewers on the Wicked Reads Review Team were provided a free copy of Buried Secrets (Timothy and Wyatt Mysteries #1) by John R. Petrie to read and review.
Posted by Wicked Reads at 7:00 AM