I Dare You to Break Curfew by Eva Muñoz

To save humankind, Camron may have to fall in love.

Vampires are real, and they are called the Inshari. After Camron Masters breaks curfew the first time, he discovers them living beneath Braylin Academy. The second time he breaks curfew, he meets a mad scientist who convinces him to take part in an experiment in exchange for more information about the Inshari. A small pinprick later, Camron wakes up as one of them and finds himself bonded to the prince of his dreams—vampire or not, Troyan is dark, brooding, and oh so delicious. But there’s the enigmatic Zaire vying for his attention too. Or is Camron just a pawn in a centuries-old feud?

All Camron’s ever wanted was to live his own fairy tale. But there’s always a catch after meeting Prince Charming. 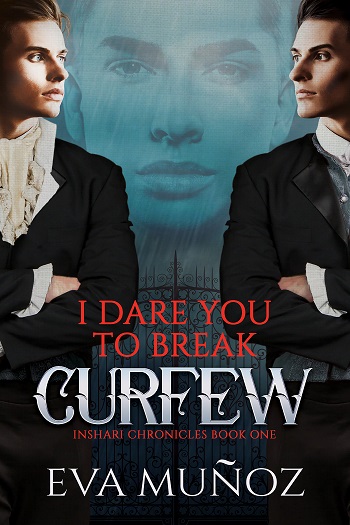 Erica – ☆☆☆
This review is by a mature adult. Do I believe a younger reader would be enthralled by the story and the characters? Absolutely yes. Do I believe I look too deeply into a novel? A resounding yes.

I Dare You to Break Curfew has a unique take on vampire culture, more flesh-eaters than blood-drinkers. Where an entire world is hidden on the grounds of a boarding school. These flesh-eaters are looking for a human to experiment on, as they slowly wither from a wasting disease.

The premise and the world-building did hit the sweet spot of highly inventive and original. However, the pacing was so rapid, I felt as if we journeyed from point A to D without B & C being explained. I was just as confused as Cam.

While I enjoyed the book, there were a few things that kept me from fully immersing myself in the storyline.

Cam's voice was inherently feminine, as well as his actions, thought processes, and behaviors. That's not a bad thing, just that I could sense the female voice of the writer beneath.

On the character front, no matter if they are adolescents by vampire terms, they still lived nearly a thousand years of days, so I was unsure why they still acted as teen humans. Time is what matures all beings, not chronological age dependent on species. So it was off-putting, how thousand-year-old vampires were essentially going to high school, yet also ready to take over the task of leading their people and developing a cure for their malady.

When it came to a betrothal, where the thousand-year-old vampire continuously attacked and bullied Cam, as if this would somehow buy Troyan's affections... I was confused.

Do teen girls act as if their crush is their hostage? Maybe.

Usually around age fourteen, we figure out, no matter our gender, the other party has a say in the matter. I mean, who would want to force someone to marry them? Held hostage for an eternity. Sociopathic much? But I see this theme repeatedly. I feel for teen girls, because they aren't the monsters literature paints them to be.

Would someone who lived a thousand years act in such an unhinged manner? No. No way. Calculating and manipulative? Oh, yes.

It just left a bad taste in my mouth, how one of the only female characters was created simply to be a vapid harpy, painting all women as if we have to force men to partner with us. Yes, I'm reading too much into this, but I see it in just about every book I read, no matter the genre or age-group.

Other than my feminist beef with how females were portrayed, I enjoyed the story for the most part, finding the novel to be unlike anything I've read before.

Where I was confused on the world building front... to slowly wither and die over a millennia seems like a better deal than to become human and perhaps die in a car accident a few days later, with no guarantee of living another fifty years at most. Also, losing all your enhanced abilities. But that's just me.

With that being said, I'm curious to see where the story goes next. I'm willing to read more by this author before I make a decision on whether or not we're a good fit, reading-wise.

Definitely recommend to readers looking for a new take on vampire culture, specifically those who don't look too deep into things or nitpick, like yours truly.

Eva Muñoz loves dreaming of worlds filled with hot guys falling in love with each other. She believes that love is love is love and everyone has a right to find their person. Her love for writing began in high school. It was because her teacher complimented a story she had written that put her on the path she is on today. She would spin yarns on her father’s electric typewriter, bind the pages together, and bring the finished product to school for her classmate to pass around and swoon over. Little did she know at the time that writing would be a career she never knew she wanted.

She may have taken a circuitous path toward her passion for writing, but when she finally made that decision to stick with it after countless rejections, she never looked back. A degree in creative writing helps too. When she’s not at her favorite coffee shop thinking up new worlds and characters to explore, you can find Eva in a classroom teaching creative writing of all things. Talk about passion meets day job. Today she is molding impressionable minds the way her teacher once did for her.

Reviewers on the Wicked Reads Review Team were provided a free copy of I Dare You to Break Curfew (Inshari Chronicles #1) by Eva Muñoz to read and review.
Posted by Wicked Reads at 6:00 AM No comments: