That Feeling When by S.M. James Blog Tour 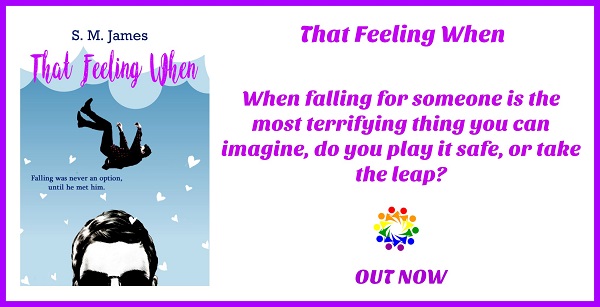 Dance Academy reject, Archie Corrigan, resents the stereotype guy ballet dancers are gay. Because he isn’t. At all. Forced to reassess his life goal at Camp Crystal Cove, it’s by sheer dumb luck he meets Landon Summers, who turns everything Archie was sure of into chaos.

Poor boy turned teen heartthrob, Landon Summers, is the name on everyone’s lips. With his unexpected leap to fame, his agent advises him to keep his bi status on the down low. Not a problem! Until Landon meets Archie.

Their unexpected friendship leads to an inevitable kiss, but their moment is caught in high definition and used as fuel for blackmail. If the truth gets out, Landon’s career could be over, and Archie will be forced to acknowledge the one thing he’s fought to deny.

But how do you go back to your average life once you’ve experienced That Feeling When... you’re finally happy? 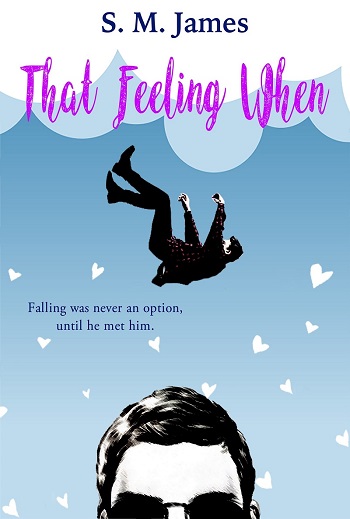 Landon Summers is into guys. I think he likes you.

And while Meredith didn’t say anything about me, there was something way too knowing in her look. Everyone else seems too into their own lives to be paying us any attention, and even when we’re announced winners of the trivia, my celebration doesn’t crack the surface chill that’s taken over me.

Meredith’s wrapped her arm through mine, and she’s cheering with the others, one hand in the air.

I’m a week in the past. Watching Landon pull on that stupid costume in the dark. The spark in his eyes as he thanked me. The brush of his skin on mine.

How was that only a week ago?

Why can’t I go back and enjoy that moment more? Savor my time with him?

Really take it all in, before he went and messed it all up.

This is a cute coming of age romance. When we first meet Archie, he is a spoiled, miserable rich kid who somehow manages to resent spending his summer at a luxurious camp. Landon is a young actor filming a movie at the summer camp. He’s a long way from home and he’s lonely and homesick.

Landon is instantly likeable. Despite his film star status, his loneliness and his self-doubt make him relatable. Archie is a more difficult character to like. His entitled apathy and his caustic observations at the start of the story are irritating. However, I love the way Archie grows into himself in this book. Events and interactions prompt self-reflection and genuine growth. Much of the book focuses on Archie growing up and figuring himself out. I found myself liking Archie as a person right about the time Archie starts to like himself.

This story fits somewhere between young adult and new adult writing. Archie is seventeen or eighteen and Landon is probably a few years older. But because of the summer camp setting – and Archie’s complicated relationship with his parents – this feels most like a teen romance. I didn’t love the summer camp setting – the kids feel too old to be campers rather than camp staff and the camp environment lacks the sense of joy and nostalgia that I usually love in young adult summer camp stories. I found it odd that while the blurb makes Archie’s dancing seem like a huge part of the story, it is only mentioned a few times.

S.M. James in an Australian author who writes books for teens about squishy sweet characters. While not writing, S.M. is a readaholic and Netflix addict who regularly lives on a sustainable diet of chocolate and coffee. Member of SCBWI. Unapologetically dishing out HEAs for LGBT+ characters. 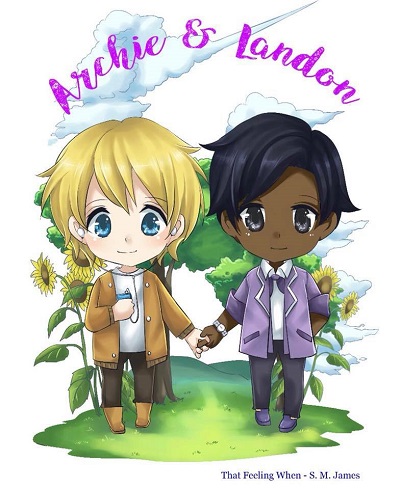 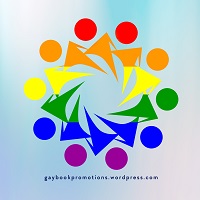 Reviewers on the Wicked Reads Review Team were provided a free copy of That Feeling When (#lovehim #1) by S.M. James to read and review for this tour.
Posted by Wicked Reads at 9:02 AM No comments:

Dare You to Lie by Amber Lynn Natusch Blog Tour

From Amber Lynn Natusch, author of the Force of Nature series, comes her first young adult thrilling novel of suspense with Dare You to Lie.

When her FBI agent father is framed for murder, Kylene is forced to move in with her grandfather, back to the small town that turned its back on her, and the boy who betrayed her.

All Ky cares about is clearing her father’s name, but someone won’t let her forget the photo scandal that drove her away two years ago. As the threats gain momentum, Ky finds an unlikely ally in the rookie FBI agent sent to keep an eye on her.

Determined to expose the town's hidden skeletons, Ky unwittingly thrusts herself into a much bigger plot. They thought she’d forgive and forget. They’re about to learn they messed with the wrong girl. 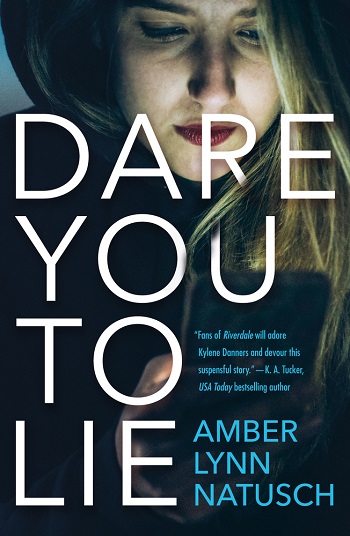 I raced through town and into Gramps’s neighborhood. When I got to the house, there was a generic-looking sedan, not unlike the one my father used to drive, parked outside. I hadn’t even pulled all the way into the driveway before Agent Douchecanoe was out of his vehicle and headed my way, file in hand.

“So you’re the errand boy,” I said to him as he scowled at me.

“You know you can hear that environmental hazard coming from a mile away, right?”

His frown deepened as he extended the file in his hand toward me. I reached for it, but he pulled it back at the last second.

“Striker said to make sure you got this.”

“Do you know what’s in there?” I countered, knowing damn well he would have looked. The suspense would have killed him.

“They’re copies of evidence from you father’s trial.”

“Ding, ding, ding!” I exclaimed, snatching the file from his hand. “Consider your errand complete. I’d tip you, but... I don’t get paid until next week.”

“Why did Striker want you to have those?” he asked, totally unfazed by my jab.

“Because I asked for them.”

He shook his head.

“That’s adorable. You think you can find something that a defense lawyer and a team of FBI agents couldn’t find.”

“They weren’t really looking, though, were they? They approached his investigation as if he was already guilty. Hard to be objective when your singular focus is to bring down the fall guy.”

“Says the girl with the singular focus of freeing her daddy,” he replied. “What a sad day it’s going to be for you when all you find in those files is the truth of your father’s guilt.” 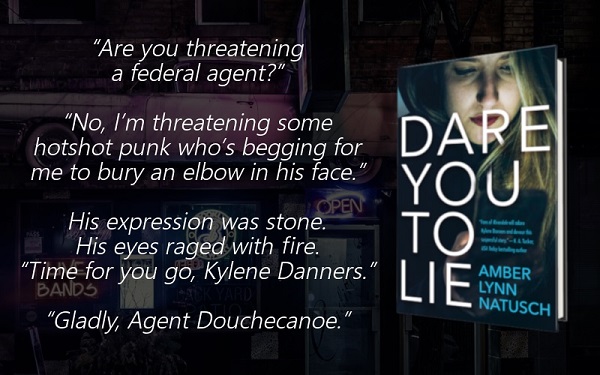 Whew! I did not really know what to expect from this book, but I loved it! Natusch really sucked me in from the start.

It's fast paced with a few different back stories and directions that this book could take you on. You're pulled in different directions right when you think you're heading straight again. It was a twisty, curvy, bumpy road that you just didn't want to navigate away from.

This book keeps you guessing and when you think you know what's going on, something else is thrown into the mix.

I can't wait to see what happens next!


Erica – ☆☆☆☆☆
Amber Lynn Natusch is a new-to-me author, and I cannot wait to sink my teeth into her backlist. I was hooked from page one, with a true heroine who took matters into her own hands. Intrigued, I didn't want to put the book down, reading it from cover to cover, but also not wanting it to end. As soon as I hit the ending, I would do just about anything to read the next.

At its core, there are two issues plaguing Ky. Her father has been incarcerated for a crime she believes down to her marrow he didn't commit, and if he did, it was in self-defense. As the daughter of an FBI agent, Ky is extremely perceptive, committed to justice, moralistic yet compassionate, has a savior complex, and highly independent.

Originally leaving town with the excuse of her father getting a job elsewhere, it was an escape from an incident with The Six during her freshman year in high school, feeling betrayed by all those she trusted. But with her father's incarceration, she is forced to move back to the town she escaped, attend the same high school, facing the injustice of those who harmed her going about their everyday lives. She's the pariah – the one who shut down football over her allegations, something no one has ever forgotten in this football town. The only highlights are being with her grandfather, her mother's best friend, and her best friend.

The mystery is front and center, causing my mind to spin as I reasoned out how it all connected. I became paranoid as I read, not trusting any interactions, several times thinking those close to Kylene now were to blame.

Not wishing to spoil the novel, I won't do a recap on any of the plot. Dare You to Lie is an addictive page-turner mystery, narrated by one of the best teenage heroines I've had the pleasure to read.

I highly recommend to fans of the author and young adult mysteries. Just this little taste has intrigued me to read more by Natusch, and I will be impatiently waiting for the next in the Hometown Antihero series

Young Adult age-range: 14+. Darker theme of pictures taken against will while drinking, which were age-appropriate and presented as a moral. 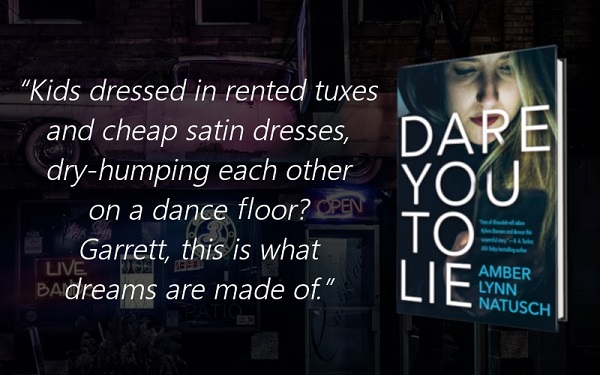 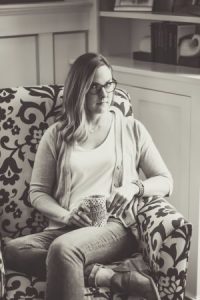 AMBER LYNN NATUSCH is the author of the bestselling Caged series for adults. She was born and raised in Winnipeg, and is still deeply attached to her Canadian roots. She loves to dance and practice Muay Thai―but spends most of her time running a chiropractic practice with her husband, raising two young children, and attempting to write when she can lock herself in the bathroom for ten minutes of peace. Dare You to Lie is her debut YA novel with Tor Teen.

To celebrate the release of Dare You To Lie, we’re giving away a $25 Amazon gift card to one lucky winner! 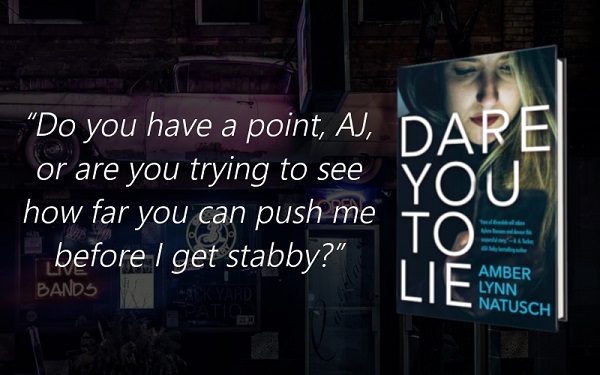 Reviewers on the Wicked Reads Review Team were provided a free copy of Dare You to Lie (Hometown Antihero #1) by Amber Lynn Natusch to read and review for this tour.
Posted by Wicked Reads at 9:25 AM No comments: