On Thin Ice by Julie Cross

Jake Hammond, current prince of Juniper Falls, captain of the hockey team, and player with the best chance of scoring it big, is on top of the world. Until one hazing ritual gone wrong lands him injured, sitting on the sidelines, and—shocking even to him—finding himself enjoying his “punishment” as assistant coach for the girls’ team.

As Jake and Brooke grow closer, he finds the quiet new girl is hiding a persona full of life, ideas, and experiences bigger and broader than anything he’s ever known. But to Jake, hockey’s never just been a game. It’s his whole life. And leveraging the game for a shot at their future might be more than he can give. 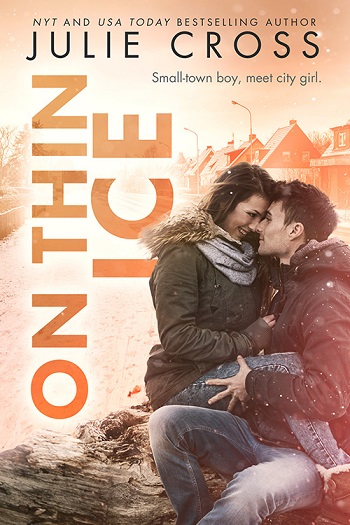 Lee’Anne – ☆☆☆☆☆
I was completely obsessed with this book from page one. I read book one in this series and felt that the middle dragged out a bit, that was 100% not the case with this book. I couldn’t put it down – I’m already excited to read the next book in the series.

Brooke has had her life completely flipped upside down – her father is arrested, her and her mother, who is a drug zombie most days, have had to move from their Texas home to live with her grandmother in Michigan, also meaning that she has had to start over at a new high school. Oh, and her entire life has revolved around dancing and her new school doesn’t have that either. All-in-all, Brooke is a super quiet girl who is just trying to get through life.

Jake Hammond is literally the town prince, star hockey player, and all-around popular dude. Until a hazing ritual that he didn’t even want to participate in goes terribly wrong and Jake ends up not only taking the blame but also with a broken collarbone. Now Jake is unable to play hockey, the town has taken his prince title, and his father is mad at him for not blaming the other players of his team for the hazing. Brooke quite literally saved Jake’s life and that combined with Jake coaching the girl’s hockey team Brooke joined means the two wind up spending a ton of time together and forming an unbreakable bond.

I really love that though the situations that happen to the kids in this book suck, they’re realistic and the author does a fantastic job bringing this story to life. This has definitely been my favorite book in the series so far. I’m really looking forward to seeing who the next book will be about!


Erica – ☆☆☆☆☆
On Thin Ice is the third installment of the Juniper Falls series. This is a standalone series, meaning the books can be read out of series order with no confusion felt by the reader.

I'm a big fan of Julie Cross's writing style and the way she creates young adults who are believable and lifelike, their quirkiness a breath of fresh air rather than over-done or over-the-top. At the same time, Cross always manages to have me clicking the pages at a rapid rate, needing to know what happens next.

Brooke's numbness resonated with me. Her father is in prison and her mother has checked out, leaving Brooke to move in with her grandmother. But she doesn't adjust well, closing herself off instead of experiencing the chaotic emotions that would tear her apart.

Brooke doesn't believe she needs anyone, but she received unlikely support and attention from the most popular boy in school, Jake. Their connection is strong and realistic. Believable. She opens up and learns to trust again.

After a hazing gone wrong, Jake is thrust into Brooke's path. This is obviously a hockey romance, but it isn't pushed to the wayside like many novels do. Hockey is a supportive character in the novel, having its own voice. I actually didn't know anything about the sport, and I learned a bunch without it coming off as textbook or too much information. The delivery was perfect, an entertaining way to teach.

I highly recommend this novel, the series, and the author to fans of young adult, as Julie Cross is on my must-read list.

Julie Cross is a New York Times and USA Today bestselling author of New Adult and Young Adult fiction, including the Tempest series, a young adult science fiction trilogy which includes Tempest, Vortex, Timestorm (St. Martin's Press). She's also the author of Letters to Nowhere series, Whatever Life Throws at You, Third Degree, Halfway Perfect, Chasing Truth, Off the Ice and many more to come! Julie Cross was a longtime resident of central Illinois but has recently moved her entire family across the country to continue her academic studies at Stanford University.

Reviewers on the Wicked Reads Review Team were provided a free copy of On Thin Ice (Juniper Falls #3) by Julie Cross to read and review.
Posted by Wicked Reads at 6:59 AM