Jordan vs. All the Boys by John Goode

There’s a time when life changes, when childhood is left behind and the first fumbling steps are taken into adulthood. One group of friends sets out for a summer of adventure and discovery. Jordan, Brandon, Ethan, and Dominic are ready to grow up and test themselves. But will their friendship buckle under the strain as they face the inevitable misunderstandings and conflicts? If they can hang on to their bond, it will see them through to the ultimate victory… 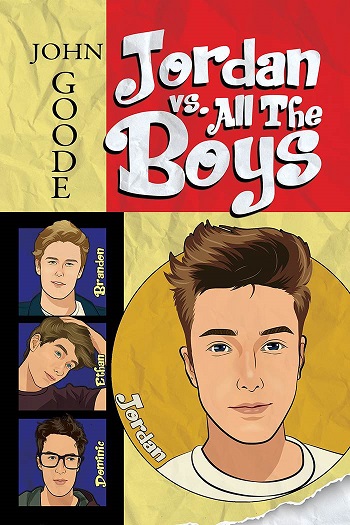 Kris – ☆☆☆☆☆
ABSOLUTELY LOVED THIS STORY! John Goode may have made a new fan in me. I enjoyed his narrative and his story telling in Jordan's voice. Speaking directly to us readers is sometimes a bold move, but I found myself pulled in and engaged in Jordan's trials and tribulations entering into the dating world, especially the LGBT dating world. Jordan takes his friends to the happening place in town to meet people. He's determined that they start living their lives and finding their way socially. He and his four high school friends embark upon a journey to the club in town with Jordan leading the way. All of them looking for love, they hit and miss over and over again until they finally find something that feels right. Jordan goes through the gamut of guys in the club scene and the dating apps until he decides maybe he's just not good at this dating thing. Who can’t relate to that??

This story is so endearing and sweet and this group of friends so sincere that my heart melted. I was giggling and smiling throughout. There's some "gamer speak" and younger slang (although all explained to us directly by Jordan), it's definitely a young adult tilt to the book. But being 53 myself, I still found the story fun and exciting and the characters well thought out and complex. I wanted more and was sad to get to the ending. Might need to pick up a few in his other series.

I'd say this book is young adult but also can appeal to an older crowd as well. The gamer speak gives me the belief that it's targeted to 14-20 year olds and there isn't anything heavier than some make out scenes.


Sarah – ☆☆☆☆☆
This is a sweet and funny story about a group of high school friends who are eager to gain a little sex and relationship experience during the summer before their senior year. As the only gay kid in his group of friends, Jordan finds this challenge more difficult than his friends do. His first experiences are both comical and humiliating but with help from his friends he slowly starts to figure out what he wants from the boys he meets.

This book gave me all the good feels. Jordan’s group of friends is wonderful. I love their friendships and I love Jordan’s self-aware analysis of his friendships. The author manages to capture the pure awkward fear that is a universal part of adolescence while also capturing the warmth, the hope, and the sarcasm that can make the teen years magical. I love the strong female characters in this book, and I love the easy acceptance of sexual differences within Jordan’s friendship group. This is an easy, fun young adult read that is both sweet and a little bit edgy. Like all the best young adult writing, it is never patronising or preachy and I think most teenagers will be able to recognise themselves in Jordan and his friends. I also really enjoyed the author’s personal reflections at the end of the story.

Age wise, this will be enjoyed by older teenagers who can relate to Jordan’s experiences. I would be happy to give a copy to my 14-year-old but the story does contain some sexually explicit references and some swearing. Parents will probably want to read this alongside younger teens so they can have conversations about the more mature content.

JOHN GOODE is a member of the class of ’88 from Hogwarts School of Witchcraft and Wizardry, specializing in incantations and spoken spells. At the age of fourteen, he proudly represented District 13 in the 65th Panem games, where he was disqualified for crying uncontrollably before the competition began. After that he moved to Forks, Washington, where against all odds he dated the hot, incredibly approachable werewolf instead of the stuck-up jerk of a vampire but was crushed when he found out the werewolf was actually gayer than he was. After that he turned down the mandatory operation everyone must receive at sixteen to become pretty, citing that everyone pretty was just too stupid to live, before moving away for greener pastures. After falling down an oddly large rabbit hole, he became huge when his love for cakes combined with his inability to resist the commands of sparsely worded notes and was finally kicked out when he began playing solitaire with the Red Queen’s 4th armored division. By eighteen he had found the land in the back of his wardrobe, but decided that thinly veiled religious allegories were not the neighbors he desired. When last seen, he had become obsessed with growing a pair of wings after discovering Fang’s blog and hasn’t been seen since.

Or he is this guy who lives in this place and writes stuff he hopes you read.

Reviewers on the Wicked Reads Review Team were provided a free copy of Jordan vs. All the Boys by John Goode to read and review.
Posted by Wicked Reads at 9:15 AM