In the domed city of Evanescence, appearance is everything. A Natural Born amongst genetically-altered Aristocrats, all Ella ever wanted was to be like everyone else. Augmented, sparkling, and perfect. Then…the crash. Devastated by her father’s death and struggling with her new physical limitations, Ella is terrified to learn she is not just alone, but little more than a prisoner.

Her only escape is to lose herself in Nexis, the hugely popular virtual reality game her father created. In Nexis she meets Guster, a senior player who guides Ella through the strange and compelling new world she now inhabits. He offers Ella guidance, friendship…and something more. Something that allows her to forget about the “real” world, and makes her feel whole again.

But Nexis isn’t quite the game everyone thinks it is.

And it’s been waiting for Ella. 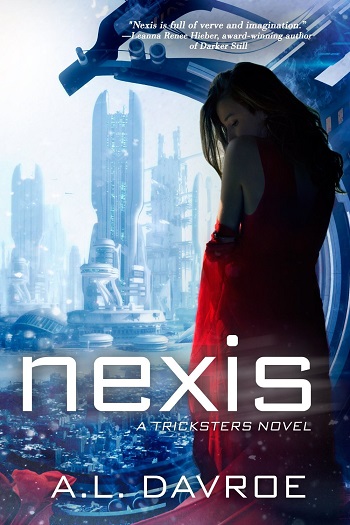 Erica – ☆☆☆☆☆
A long, long time ago, Erica (that's me) would become engrossed in a novel to the point she would feverishly read. After reading 1000s of books, and writing 20+, Erica lost that spark – the ability to immerse herself in a world without knowing what was going to happen next, to not see the threads her fellow author was weaving, which spoiled her reading experience. Erica has switched between genres, going far, far away from anything she would create, but to no avail.

Then came Nexis. A story so far removed from anything Erica had ever read before, she was ecstatic to be able to read the story as the author intended.

A.L. Davroe's world-building envisioned two separate universes: the domed cities offering protection from the almost inhabitable, war-ridden landscape, and a lifelike, virtual-reality MMORPG video game world the characters immerse themselves in. The descriptions in the book were perfectly written – not too much, but enough where I could imagine exactly how it looked.

Characterization: Still a junior/senior high school age, they are simultaneously selfish and selfless. Whereas the adults have had a lifetime to lock into their mindset, making them stubborn and unyielding. All of which is exactly how human nature would dictate.

Storytelling: Nexis is far from a humorous read, but I found myself laughing in pure delight on several occasions. Adventuring and Questing. I've been playing video games since birth, so reading the characters being gifted armor from their enemies leaving the playing field, or scavenging for loot, to accepting a bounty on a dragon...

You're my side quest.

The gaming aspects, which were more than half of the book, truly delighted me. Detailed, thoroughly researched, and extremely engrossing. The concept sounds difficult to read and enjoy, but it heightened the story immensely. The detailing... the Freedom Quilt had me getting a bit choked up, to be honest, because of its origins in American History, and that is exactly the type of object you'd find hidden in an MMORPG/RPG game.

Romance: Ella is a seventeen-year-old girl, and she acts as such. Even a girl my age is prone to getting weak-kneed over a handsome face. I felt Ella a strong character, not at all boy-crazy, and I was even empathetic to her beginning moments of spoiled-brat-ness (under the circumstances (my age), I could understand both father and daughter's position). There is a romantic entanglement throughout the book, and by book's end, a mystery is still not revealed. UGH! I threw a temper tantrum when I finished, but, boy, did that make me want to dive right into the next book. (I know how annoying what I'm about to do truly is) “Author, when is the next in the series going to be released?”

Recommended: Young Adult girls and guys (especially gamers), adult gamers who will find this book delightful, and anyone willing to give this book a try. If you're not a gamer, have never played an RPG/MMORPG, aspects will most certainly confuse you. But, hey, you might decide to boot up your PC or a console after finishing the book to try out a game or two.

In all seriousness, Nexis has many plot threads woven together, keeping the reader on their toes all the way to the end of the book and beyond. I am waiting impatiently and with anticipation for the next in the series. The writer in me is already spinning my own web, trying to figure out how this author ticks, because I want to know the same question Elle asked.

Who played the game?

Young Adult age-range: 12+: video game & in real life violence | sexual content with kissing shown and more activity perceived | Parental units, judge your child's maturity on this. But it's mild by comparison to most TV commercials and exactly like most video games.

A.L. Davroe grew up in Connecticut and, after traveling to many countries, many states, and many fantasy realms - sometimes even living in them - she has decided that Connecticut is a wonderful little state. She likes books, cats, chai tea lattes, and the word "chime." By day, A.L. makes cheese for a local artisan dairy and, by night, A.L. writes in various sub-genres of adult and YA fantasy, science fiction, horror, and romance, but most of her work tends to have a revisionist twist to it. You can follow her various forays into aesthetic merriment and misbegotten shenanigans on Facebook or Twitter and you can check out her current musical obsessions on her website.

Reviewers on the Wicked Reads Review Team were provided a free copy of Nexis (Tricksters #1) by A.L. Davroe to read and review.
Posted by Wicked Reads at 4:00 AM