Riding with Brighton by Haven Francis

Yesterday, Jay was convinced his life was damaged beyond repair.

Yesterday, Brighton was sure his life was perfect.

Realizing he’s wasted his life in the meaningless pursuit of popularity and athleticism, Jay Hall knows he has nothing in common with alternative, free-thinking artist Brighton Bello-Adler. But he’s determined to change that.

Brighton’s managed to fill his life with an eclectic mix of people and interests that keep him satisfied. As the only gay guy in his small town, the one thing that’s missing is a man, but Jay’s not gay, so Brighton’s not sure what he’ll gain by letting him into his life. Still, he’s willing to find out.

Heading off on an impromptu road trip, the boys chart a course connecting their worlds, and along the way discover pieces of themselves they didn’t know were missing. As the sun rises on a new day, Jay and Brighton know their lives have changed. Now they just have to figure out how to live in them.

In a fresh and clever romance that turns stereotypes upside down, the journey to coming out and coming of age is full of challenges and surprises, but ultimately, acceptance and love. 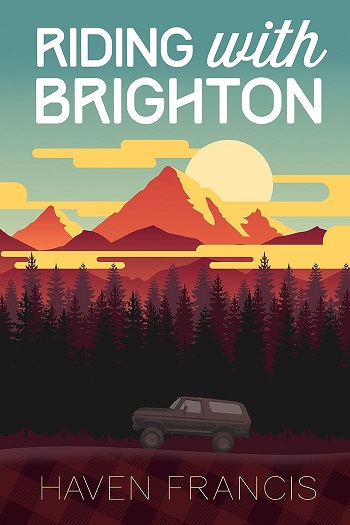 Veronica – ☆☆☆☆☆
Jay is a jock and pretty much most popular guy in school. He wakes up on Friday morning and has an epiphany. He is not happy with his life and he wants to make changes. He realises the highlight of his week is the class he shares with Brighton, the school's only openly gay student.

The story follows Jay through a most amazing and transformative weekend of life. In class on Friday, Jay gets Brighton's number after a flirty, innuendo filled conversation about pens. On Saturday, a nervous Jay meets Brighton in a local park and he spends a fun-filled day with Brighton, exploring Brighton's world and their town.

With Brighton's help, Jay bravely take steps to come to terms with his sexuality and to change his life for the better. Jay is smitten with Brighton and it is easy to see why. Brighton is adventurous, full of life, creative, entrepreneurial, and the list goes on. I loved their conversations and their honesty with each other.

While the guys are together in their own little bubble everything is great, but eventually the rest of the world seeps in and Jay has to face the reality of his friends and family learning the truth about his sexuality and it’s rough going at times.

The story concludes with an inspiring epilogue that left me on a high. As I write this review and think back on the story, I can't stop smiling. I had a great time following Jay and Brighton through their weekend. This is a terrific story.

An escapist filled with wanderlust, writing is HAVEN FRANCIS’s responsible adult version of getting in the car and driving without aim. Reading and music are close seconds. She and her husband can often be found checking out their favorite bands locally or hundreds of miles away via road trips. Reading is something they don’t have in common, but he tolerates her dimly lit late-night habit.

Haven graduated with a BA, double majoring in English literature and fine arts. She made a living writing about trends in interior design but thoroughly enjoys that fact that people, unlike furniture, can fall in love. She especially loves when they fall desperately and into a forbidden kind of love. She has a slightly embarrassing fascination with the period of life that sits awkwardly between childhood and adulthood; the years when nothing is certain, lots of mistakes are made, falling in love is inevitable, and finding yourself is a struggle. For her it’s a fun place to escape to and she hopes her readers agree.

To date, Haven has published five New Adult romance novels, two of which have been Amazon best sellers. She also works as a graphic designer but considers Mom her most important title.

Reviewers on the Wicked Reads Review Team were provided a free copy of Riding with Brighton by Haven Francis to read and review.
Posted by Wicked Reads at 10:00 AM No comments:

I'm Not in the Band by Amber Garza

I like Kassidy Milton. There, I said it. She’s funny, beautiful—even though she doesn’t know it—and my favorite kind of weird. But I can’t tell if she’s into me or just trying to get close to me for a chance with my famous twin brother instead. I mean, it has to be me. I am the better-looking one.

But Kassidy has some demons, and she’s not good at letting people in. That happens when you’ve been hurt by someone close to you. I can relate. Trust is a funny thing; it’s hard to gain but easy to lose. I might just learn that the hard way. 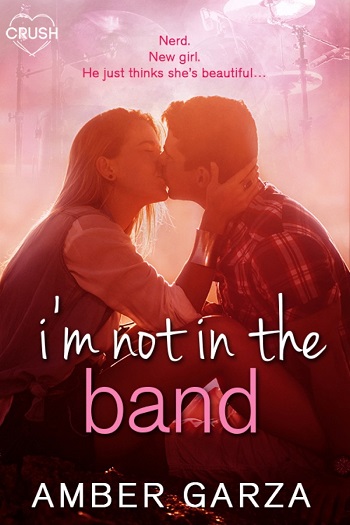 Kris – ☆☆☆☆☆
LOVED this book! Everything about it appealed to me for a young adult read. With just the right amount of innocence but still a bit of steam between the two leads to keep me interested, I found this book highly addictive. Drawing out the ghosts in Cassidy's past just long enough to keep things suspenseful but not aggravating (get to the point already type thing), I found the pacing to be perfect.

Cassidy is trying new things, she's coming into her own person after a tragedy has her rethinking her life. Archer is trying to get out from under the shadow of his famous twin brother, who is the lead singer for the newest hot boy band. Everyone in school wants to get to know Archer only to get close to his twin. Cassidy is the new girl in school, but that's not the only thing that attracts Archer to her.

There's some good young adult strife, some funny tweets and Facebook posts, and great coming of age drama. Very well written, I thoroughly enjoyed it from cover to cover!

Amber Garza currently lives in California with her amazing husband, and two hilarious children who provide her with enough material to keep her writing for years.

Amber loves to connect with her readers. 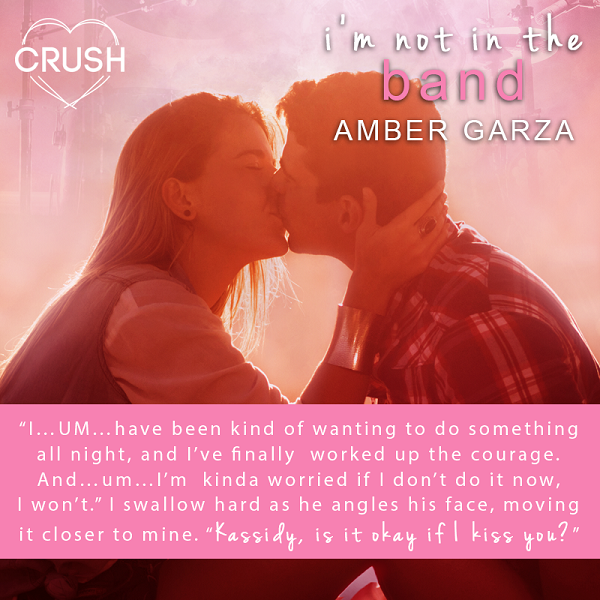 Reviewers on the Wicked Reads Review Team were provided a free copy of I'm Not in the Band by Amber Garza to read and review.
Posted by Wicked Reads at 8:29 AM No comments:

Why I Loathe Sterling Lane by Ingrid Paulson

Per her 537 rules, Harper Campbell keeps her life tidy—academically and socially. But the moment Sterling Lane transfers into her tiny boarding school, her twin brother gets swept up in Sterling’s pranks and schemes and nearly gets expelled. Harper knows it’s Sterling’s fault, and to protect her brother, she vows to take him down. As she exposes his endless school violations, he keeps striking back, framing her for his own infractions. Worst of all, he’s charmed the administration into thinking he’s harmless, and only Harper sees him for the troublemaker he absolutely is.

As she breaks rule after precious rule in her battle of wits against Sterling and tension between them hits a boiling point, she’s horrified to discover that perhaps the two of them aren’t so different. And maybe she doesn't entirely hate him after all. Teaming up with Sterling to save her brother might be the only way to keep from breaking the most important rule—protecting Cole. 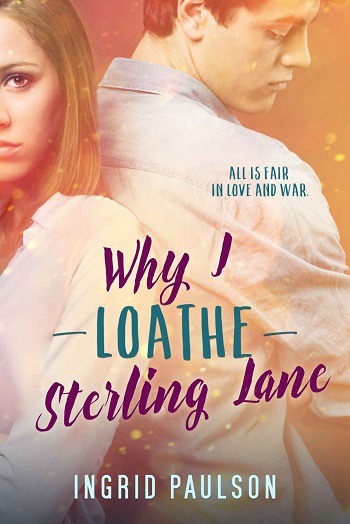 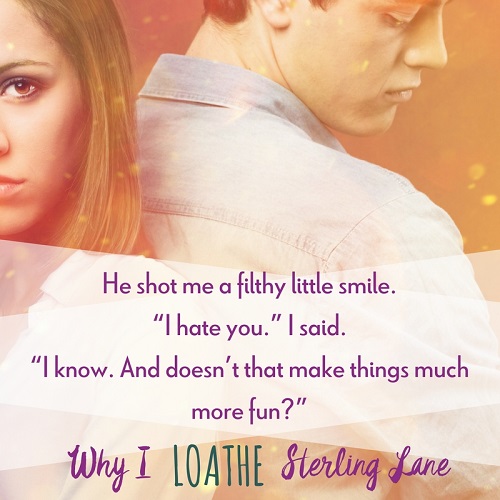 Ingrid Paulson is a new-to-me author, one I plan on keeping my eye on for future young adult novels.

Harper is the female half of a pair of fraternal twins who go to boarding school. Harper is definitely a type-A personality. With the death of her mother, the need to keep her twin safe (Cole is a free-spirit who is gullible and sees the best in everyone), and the need to prove herself worthy to a misogynistic father. Harper has a list of rules she abides by, is one of the most stubborn heroines I've read to-date, and doesn't have a single cell in her body screaming TSTL (too stupid to live) or damsel-in-distress. She's a force to be reckoned with and makes no apologies for it.

Sterling is a bad boy with a good heart – bit of a rich, misunderstood d-bag. Sterling is Cole's new roommate, and he and Harper do NOT start on the best of terms.

What unfolds on the pages of this love-hate novel (one of the first which truly brings on the hate) frustrated me to no end. So frustrated, I was reading feverishly, while white-knuckling my Kindle from the need to reach in and strangle both Sterling and Harper. This isn't chemistry, tension, and foreplay, at least not at first. It's true hate. I was so frustrated for Harper on every front, but I couldn't help but understand and like Sterling. Cole... oh, brother – Cole. *sigh* Ms. Paulson, please write a follow-up with Cole – I want to see someone knock some sense into him.

Harper and Sterling, they were both wrong. All. The. Time.

The frustration finally abated as our antagonists started working together instead of against each other, and I was able to relax. The pages didn't fly by as quickly, I wasn't snapping at anyone who broke my concentration, but I enjoyed how it did start to feel like foreplay instead of grounds for premeditated murder.

Mad props to the author for the level of frustration I felt. Harper was a right-fighter, no matter how wrong she may have been, and it bothered me how her voice wasn't heard in the beginning. I've been there – often – and it made me feel connected to Harper, even when she was going beyond the realm of rationality.

I don't wish to give plot points out, so I'm being vague. Side characters: there weren't many, but they added to the storyline, allowing Harper and Sterling to shine. I also appreciated how there was no 'girl-shaming.' Harper was one type of girl, and her roommate another, and Harper made sure no one disrespected Kendall for being a girly girl or thought her unintelligent because of it.

Highly recommended to fans of the young adult genre and the love-hate premise. 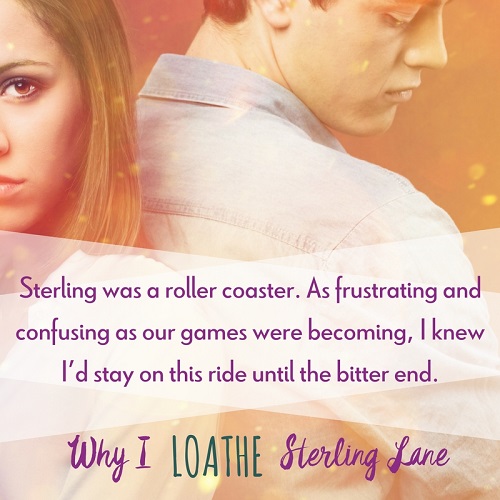 Ingrid Paulson does not, in fact, loathe anyone. Although the snarky sense of humor and verbal barbs in Why I Loathe Sterling Lane might suggest otherwise (and shock those who think they know her best).  Ingrid lives in San Francisco with her husband and children and enjoys long-distance running, eavesdropping, and watching science documentaries. She has always loved books and writing short stories, but was surprised one day to discover the story she was working on wasn't so short any more. Valkyrie Rising, a paranormal girl power story was Ingrid's first novel. Expect another humorous contemporary romance to join the list soon. 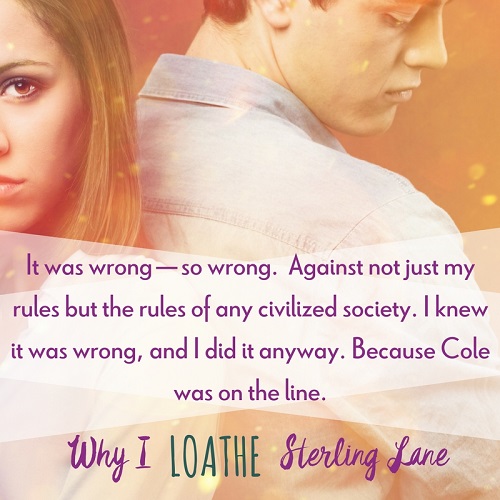 Reviewers on the Wicked Reads Review Team were provided a free copy of Why I Loathe Sterling Lane by Ingrid Paulson to read and review.
Posted by Wicked Reads at 10:42 AM No comments: