The Border by Steve Schafer

One moment changed their lives forever.

A band plays, glasses clink, and four teens sneak into the Mexican desert, the hum of celebration receding behind them.

Not fireworks―gunshots. The music stops. And Pato, Arbo, Marcos, and Gladys are powerless as the lives they once knew are taken from them.

Then they are seen by the gunmen. They run. Except they have nowhere to go. The narcos responsible for their families' murders have put out a reward for the teens' capture. Staying in Mexico is certain death, but attempting to cross the border through an unforgiving desert may be as deadly as the secrets they are trying to escape... 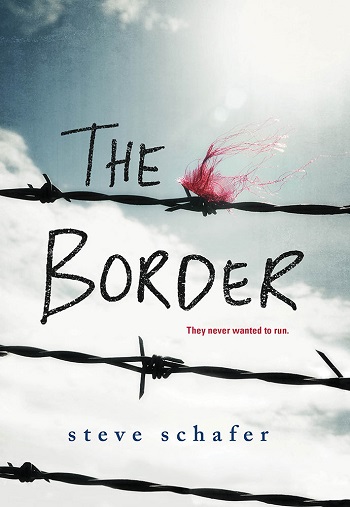 Veronica – ☆☆☆☆☆
From the moment they hear gun shots, the lives of Pato, his cousin Arbo, popular fellow student Marcos, and Marcos' sister Gladys, are changed forever. From the minute they discover the blood bath where their parents and families have been killed, which ultimately leads to them crossing the desert from Mexico to the US, unprepared and with no clear idea of where they are headed.

The author does not hold back in showing us the horror of what Pato and his friends are going through, which is part of what makes The Border such a gripping story. I was on the edge of my seat watching these teens go from one dangerous situation to another, with only each other to lean on. The problem is, they are teens with the usual teen angst and fighting among themselves, which sometimes makes the situation worse.

This is one of those stories where I had no idea where the story was going and I love that. Would they survive the desert? Would they make it to the US? I had no idea and I was just along for, what is at times, a harrowing ride. But you know what? Every now and then little glimpses of hope and love appear in the story and those moments are more meaningful given what Pato and the group are going through. I fell in love with Pato, Arbo, Marcos, and Gladys and I just wanted them to survive. To live. The Border is a fantastic story that I think teens and adults will enjoy it.

Steve Schafer is an avid cultural explorer, animal lover, bucket-list filler, and fan of the great outdoors. He has a master’s degree in international studies from the Lauder Institute at the University of Pennsylvania. He lives in Blue Bell, Pennsylvania, with his wife and two children. The Border is his first novel.

Reviewers on the Wicked Reads Review Team were provided a free copy of The Border by Steve Schafer to read and review.
Posted by Wicked Reads at 7:58 AM