Fangirl meets Simon vs. the Homo Sapiens Agenda in this funny and poignant coming-of-age novel from New York Times bestselling author Christina Lauren about two boys who fall in love in a writing class—one from a progressive family and the other from a conservative religious community.

Three years ago, Tanner Scott’s family relocated from California to Utah, a move that nudged the bisexual teen temporarily back into the closet. Now, with one semester of high school to go, and no obstacles between him and out-of-state college freedom, Tanner plans to coast through his remaining classes and clear out of Utah.

But when his best friend Autumn dares him to take Provo High’s prestigious Seminar—where honor roll students diligently toil to draft a book in a semester—Tanner can’t resist going against his better judgment and having a go, if only to prove to Autumn how silly the whole thing is. Writing a book in four months sounds simple. Four months is an eternity.

It turns out, Tanner is only partly right: four months is a long time. After all, it takes only one second for him to notice Sebastian Brother, the Mormon prodigy who sold his own Seminar novel the year before and who now mentors the class. And it takes less than a month for Tanner to fall completely in love with him. 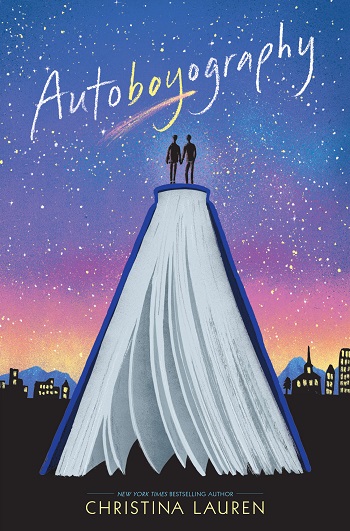 I need to preface this review with how I struggled at the beginning of Autoboyography. I also need to add I received an advanced copy, so I cannot comment on whether or not this is present in the published version.

I was close to DNFing the novel several times over during the beginning, which would have been a shame. The premise kept me reading – a bisexual writer in this coming-of-age tale. Truly, I’m thankful I kept reading, as I enjoyed the story immensely. To be honest, there was a different feel to the first three chapters versus chapter four and beyond. The pacing, flow of information, and scene structure, the majority of the first three chapters were rambling monologue, giving info the reader needed, but in a storytelling fashion. All tell, no show. There was little to no dialogue. But my biggest issue was how the narrator dropped readers into scenes in the middle of it, only for a few paragraphs, then would teleport the reader into another time and place without a transition.

Explanation: paragraphs of a classroom scene. One word later, the reader would be thrust into the mall. Classroom, then arcade. Classroom, then home. All partial scenes, in the middle, with no beginning or end. While this promotes fast pacing, cutting out any unnecessary info, it was beyond jarring and confusing. I'd flip back pages, wondering if I'd somehow missed the end of one scene, a mark denoting a passage of time, and the beginning of the next. Days could go by from the end of one sentence to the beginning of the next.

If you are reading this review, like I went searching due to my struggles, hang in there. It's worth it. The scenes become full-length at the start of Chapter 4. The authors begin showing, instead of telling.

Tanner is a well-rounded boy from a supportive family, with an equally supportive best friend. It was a breath of fresh air to have a narrator who wasn’t abandoned, or bleeding angst on every page. Dry wit and self-depreciating humor, Tanner knows who he is, what he wants, and where he wants to be in the future. He’s a non-religious bisexual boy living in an LDS community, raised by a Jewish parent and one who holds deep-seated resentment toward the Mormon church.

While Autoboyography does show different sides to LDS, instead of besmirching it, it’s written in a gray area, where it’s decisions made, left up to the individual.

Tanner falls deeply into infatuation with the TA in the Seminar, a class where students write a full novel during the semester. Color me jealous, but I wish this existed when I was in high school. The only issue, the boy Tanner falls for happens to be the son of a bishop in the LDS church.

On the pages, the reader follows Tanner’s coming-of-age journey, as the boy he loves has a conflict of conscience but never of faith. The comfort and clarity Sebastian found in his faith was inspiring, even during his deep struggles with the followers of said faith. The evolution mirrors the book Tanner’s writing. Cute. Sweet. Mortifying. Several times over, I dropped my Kindle into my lap, only to cover my face with my upraised palms. I was embarrassed for Tanner – blushing, laughing, and smiling. Shaking my head at the dang kid. Mortified.

Tanner and Sebastian had chemistry, tension, and a push-pull banter that was as humorous as it was seductive. A true connection was felt from the pages, causing the reader to become emotionally invested in the story.

I thoroughly enjoyed Autoboyography, and am so thankful I continued forth after struggling with the beginning. I recommend it to fans of the authors, as well as fans of the MM romance and Young Adult genres. But my recommendation goes deeper – young adults, especially those struggling with their sexuality while having faith, to experience the comfort of knowing they aren't alone. I also recommend reading by parents of these same children, to get a grasp on what they may be going through.


Sarah – ☆☆☆☆
Like all the best Young Adult writing, this story made me laugh and smile and cry and reflect. It is the story of a bisexual boy from an affluent liberal family who finds himself one of only a handful of non-Mormon kids in his new Utah small town. And he finds himself falling hard for his very Mormon writing mentor.

I was able to overlook the erratic pacing and the sometimes confusing plot structure because I fell hard and fast for Tanner. Most of the story is told from Tanner’s perspective and his experiences and observations are wonderful. I loved his friendship with Autumn and I wanted so badly to protect him from Sebastian.

Tanner’s experience as an outsider in a Mormon town is only compounded by his mother’s experiences growing up LDS and her adult resentment towards the church. Similarly, Tanner’s ‘coming out’ is tainted by his aunt’s very negative experience a generation earlier. I loved that the kids and the adults in this story are all multi-dimensional. We don’t get good and evil, we get people trying to do what’s right for them. Even when I wanted to hate Sebastian’s family, I was forced to understand their emotional and spiritual struggles.

Together, Sebastian and Tanner are wonderful. They are sweet and sometimes beautifully innocent. I wanted so desperately to protect their hearts – but this story is too honest for that.

While I loved the story, I did struggle with the writing. At times, scenes ramble on and on but in other places, readers are jolted from aborted scene to aborted scene quite erratically. But these characters are special and I had a powerful emotional reaction to their story.


Kris – ☆☆☆☆☆
A really new and different take on a coming of age/forbidden love story. Tanner's family moves to Utah, the land of Mormons and the LDS (Latter Day Saints church) where his mother grew up but left after the church shunned her gay sister. Tanner is bisexual and moving from open and out California to closed and closeted Utah is an adjustment, for sure. Of course, the one person Tanner finds a spark for is the LDS Church's, bishop's son!! Couldn't even be a girl he found completely intriguing. Sebastian is the poster boy for the LDS church. He's lived his entire life with a smile that covers a lie. Tanner brings out everything Sebastian is fighting to keep hidden. The two take on a forbidden romance and all the angst that comes with the fight against Sebastian's bishop father, the closed minded church town, and the intensity of first love. The beginning of the book threw me off a bit at first. Slightly disjointed and halting with quite a bit of over description. I was unsure where this story would go, but boy did my perseverance pay off and I implore you to do the same, KEEP READING! This book was a "can’t put it down, stayed up till 2am reading" story! Although I did find the ending a bit lackluster, although it was sweet and the way I wanted, I guess I just wasn't finished reading and wanted more. The book is very Young Adult with great descriptions that don’t go into much real detail but written extremely well.


Ruthie – ☆☆☆☆
I don't often read coming of age novels, but I am very glad that I read this one. The blurb absolutely captured my imagination, and did not disappoint.

I found that Tanner was beautifully written as a boy who is right on the cusp of manhood, but can fall either side of the line, just depending on what is happening to him at that time. He was such a fabulous romantic writer – even though we don't get to read his book, anyone who ever wrote pages of their feelings of unrequited love, can imagine just what he has expressed in it.

And the whole LDS element was fascinating to me, as someone who lives in the UK, where there really aren't such large groups of Mormons. I met a young man going on his mission a few years ago on a flight to Ghana – so I remembered his nervousness, his earnest desire to do well, and yet he had never been away before and had very limited expectations of being able to talk to his family over the next two years. So, I could feel for Sebastian, and the prospects of his next few years.

The idea of basing the story around a book writing class is inspired, as it provides so many opportunities for the two guys to meet, which would have not happened otherwise. There are also some fabulously important people that get to join the cast; Autumn without a doubt being the most noteworthy. Whilst at the beginning of the book she dips in and out of sight, her contribution later is at times essential, and also, she holds a twist or two in her hands!

Really, my advice is that you should get yourself a copy and enjoy a wonderful love story, with some unexpected twists and turns. And do it as soon as you can. This book is on my re-read list, because I know I will enjoy it even more second time around. Thank you, Ms. Lauren.

Christina Lauren is the combined pen name of long-time writing partners/besties/soulmates/brain-twins Christina Hobbs and Lauren Billings. The coauthor duo writes both Young Adult and Adult Fiction, and together has produced fourteen New York Times bestselling novels. Their books have been translated into 31+ languages. (Some of these books have kissing. Some of these books have A LOT of kissing.) 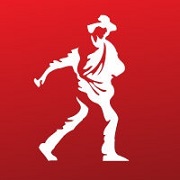 Reviewers on the Wicked Reads Review Team were provided a free copy of Autoboyography by Christina Lauren to read and review.
Posted by Wicked Reads at 9:00 AM