Mira MacDonald, a proud lesbian, and Rob Stevens, gay but in the closet, don’t have it easy at their high school. Luckily they’ve always had each other and their close friendship to rely on, and it makes facing the bullies a little easier. At least for Mira. Rob is also struggling with untreated depression, and lately, Mira’s sweet and funny friend has become increasingly paranoid, suspicious, and obsessed with death.

Things go even further downhill when Mira begins dating Talia Acevedo and Rob becomes convinced Talia is driving a wedge between them. Mira knows Rob needs her, but his jealousy and irrational fears are becoming harder to balance with her relationship with her girlfriend. Add to that escalating harassment from bullies, and Rob is being driven closer and closer to an edge Mira worries she can’t pull him back from.

But she has no idea how serious the situation is until, during one of their midnight chats, Rob reveals he has a solution—a desperate final measure to put an end to the bullying… permanently. This time, trying to help her friend and save the school could cost Mira her life. 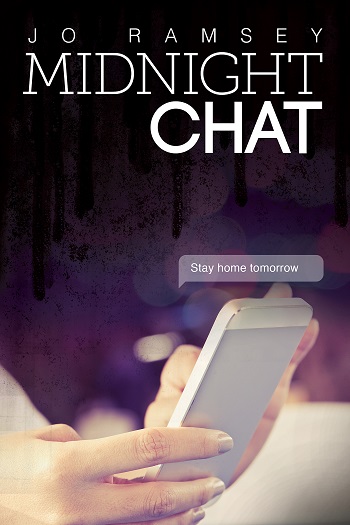 Rob has been the target of school bullies for years and his mental health is deteriorating. The adults in his life fail him. He doesn't like Mira's girlfriend and this adds pressure to their friendship.

This story shows us the serious damage that bullying can do to a person's mental health and that the bullying doesn't just hurt the person being bullied. I found myself wondering what I would have done in Mira's place. It is not hard to see how Rob ends up coming to the conclusion he does.

I'm not sure I'd say I enjoyed Midnight Chat but I would say it is a good book and it is good to see stories like this one bring this serious issue out in the open.

Reviewers on the Wicked Reads Review Team were provided a free copy of Midnight Chat by Jo Ramsey to read and review.
Posted by Wicked Reads at 12:29 PM