Off the Ice by Julie Cross

All is fair in love and hockey…

Claire O’Connor is back in Juniper Falls, but that doesn’t mean she wants to be. One semester off, that’s what she promised herself. Just long enough to take care of her father and keep the family business—a hockey bar beside the ice rink—afloat. After that, she’s getting the hell out. Again.

Enter Tate Tanley. What happened between them the night before she left town resurfaces the second they lay eyes on each other. But the guy she remembers has been replaced by a total hottie. When Tate is unexpectedly called in to take over for the hockey team’s star goalie, suddenly he’s in the spotlight and on his way to becoming just another egotistical varsity hockey player. And Claire’s sworn off Juniper Falls hockey players for good.

It’s the absolute worst time to fall in love.

For Tate and Claire, hockey isn’t just a game. And they both might not survive a body check to the heart. 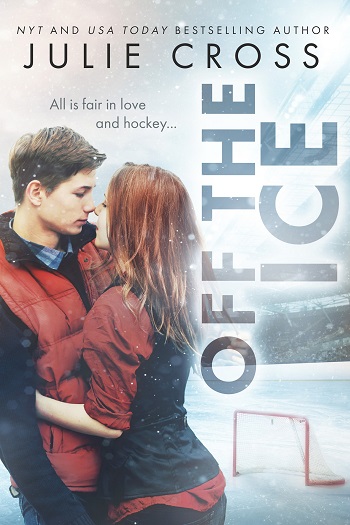 This was an okay read, I feel like the story just dragged a bit in the middle. It was really slow at parts, but I will say the writing is good and the parts that weren’t slow are great!

Tate is a goalie for his high school’s hockey team, which in his tiny town is a huge deal. Since he was a kid, he’s had a crush on this older sister’s best friend, Claire, and right before she heads off to college she witnesses his father’s drunken abuse and the two have an unbreakable connection. When Claire goes away to college Tate lets his feelings go, but when Claire comes home to help care for her very sick father, old feelings come back to the surface. Tate is fighting to earn his place on his team, get a spot on an NHL team, and battle his father’s strong-arming him and his friends. While Claire is fighting to keep her parents’ business afloat, earn enough money to pay for college and keep her dreams alive. The two have a lot going on and have to really fight at a relationship.

My favorite aspect of this book was that Tate has a long-time girlfriend, Haley, who is perfect – gorgeous, smart, cheerleader, etc. Only, she’s kind of awesome, and I found that refreshing. Usually that character is written as catty and mean, but Haley is awesome and I honestly think I wound up liking her mother then Claire (like I really hope she gets her own book – *hint, hint* LOL). This is a book that really covers it all and though I think a few of the details could have been cut out to make this a more fast-paced read, I did enjoy the author’s wide variety of characters.


Jordan – ☆☆☆☆
This was my first time reading any of Julie Cross' books and Off the Ice (Juniper Falls #1) was a nice introduction. The story flowed well and the characters were developed. I will definitely be looking to see what's in store next for Juniper Falls!

Claire O' Connor takes time off from college to return to her small hometown of Juniper Falls and help take care of the family's hockey bar while her father begins to recover. She has zero intentions of sticking around, but running into to Tate Tanley has her questioning everything.

I never knew I was such a fan of hockey until after reading Off the Ice. Cross does a lovely job of weaving hockey and romance. I often times forgot I was even reading a young adult book because this one seemed to straddle the line between young adult and new adult. Off the Ice was a solid 4-star read for me.

Reviewers on the Wicked Reads Review Team were provided a free copy of Off the Ice (Juniper Falls #1) by Julie Cross to read and review.
Posted by Wicked Reads at 10:35 AM