Family, friendship, love, and a summer to remember.

Identical twins Aiden and Max Kingsman have been a matched set their whole lives. When they were children, Aiden was happy to follow his extroverted brother’s lead, but now that they’re in college, being “my brother, Aiden” is starting to get old. He’s itching to discover who he is outside of his “twin” identity.

Oliver’s goals for the summer are simple: survive his invasive family, keep his divorced parents from killing each other, and stay in shape for rowing season. He’s thrilled when he runs into his old friends, the Kingsman twins, especially Aiden, the object of a childhood crush. Aiden is all grown-up, but some things have stayed the same: his messy curls, his stability, and how breathless he makes Oliver. Oliver’s crush comes back full force, and the feeling is mutual. Summer just got a whole lot hotter.

Fun-loving Max takes one thing seriously: his role as “big brother.” When Aiden drifts away, Max can’t understand how his own twin could choose a boy over him. Summer won’t last forever, and with friendship, family, and happily ever after on the line, they’ll have to navigate their changing relationships before it’s too late. 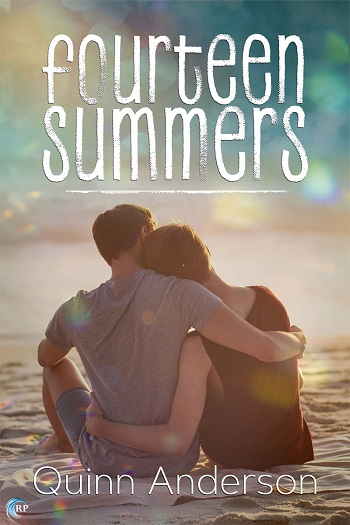 While we strive to provide reading recommendations that are appropriate for most young adult readers 12 and older and keeping the blog free of adult content in order to achieve this, there are times when we discover a book that walks that fine line between young adult and new adult. It's that gray area of novels, romance or not – the coming of age story.

Fourteen Summers is one such book – we consider it neither truly young adult, nor truly new adult, but rather a coming of age story. It is because of this that we ultimately decided to share it on our YA blog, despite the sexual content. We feel the challenges the young men face will resonate with older teens as their relationships with friends and potential romantic interests change over the years. Because the book includes non-explicit scenes that aren't fade-to-black, but are age-appropriate for the characters, we recommend Fourteen Summers for mid-to-older teens. Also, we strongly encourage parents of mature, younger teens to read the book to assess for themselves if it’s appropriate for their child if they're uncomfortable with their teen reading sex scenes. We feel that Quinn's message is one that will resonate with many young readers, but especially with teens who are grappling with their own sexuality.

It starts off fourteen years in the past, with three little boys. A pair of twins try to draw their best friend into their welcoming family. It was a heart-tugging yet lighthearted, warm and fuzzy, humorous scene that set the perfect stage for the novel to come.

As identical twins, Aiden and Max have always had a built-in support system, best friend, and constant companion, perhaps causing an unhealthy codependency. They were both devastated when their childhood best friend moved away, but they had each other.

Oliver wanted nothing but a warm and welcoming family that didn't fight with one another, after growing up amidst a bickering set of parents who ultimately divorced, and a rowdy, obnoxious yet loving extended family. He loved his best friends, but was jealous of not only their connection as twins, but of their loving parents as well. Oliver just wanted to be part of their family instead of his own.

Fourteen years later... after a decade apart, a chance meeting in the grocery store sets off a chain of events that tests the binds of different types of relationships, acting as both the angst of conflict and the catalyst of change.

While on the outside looking in, Aiden and Oliver seem almost too perfect in juxtaposition to those around them, especially with Max. Max is jealous, used to being the alpha of his brother and their friend, and he can't handle being the third-wheel. I understood Max, and I think it helped being inside his head during his narration, but I do fear readers not empathizing with him, maybe finding him obnoxious or frustrating. But no character should be perfect, and Max was used to show how Aiden and Oliver are far from perfect themselves. Perception is reality, and Max's perception helps paint a full picture within the novel.

The novel was sweet and warm, yet had its moments when it became highly emotional. There was also a yummy decadence of a longtime crush evolving into something more adult. The realism was shown via Max's interactions, as he was able to force the reader to step out of the warm and fuzzy romance and angst and show a different type of relationship, that of twin brothers and of best friends.

I highly recommend Fourteen Summers. While this is listed as MM romance, I do believe it would be appropriate for mid-to-older teens, (however, it is not fade-to-black sexual situations) as all three boys are barely 20 and experiencing coming-of-age growth as the novel progresses.


Sarah – ☆☆☆☆
This is a sweet and very innocent feeling story. While there is a central romance, it is more a coming of age story about twins growing into an adult relationship. The characters are college age, but living at home with parents for the summer makes them all seem much younger.

Identical twins Aiden and Max are complete opposites but have been inseparable since childhood. Aiden’s interest in Oliver marks the first serious relationship for either brother and it hurts Max more than either of them expected.

This story is as much about the two families as it is about the two boys. Even as a small child, Oliver was aware of the differences between Aiden and Max’s warm and happy parents and his own home where arguments and grudges were normal.

This is a slow and thoughtful story. It is a coming of age story about three boys who are finding themselves and working to make their childhood relationships work as adults. The romance is sweet (with a tiny bit of heat) but for me it was the boys’ relationships with their siblings, parents, and friends that were most meaningful.

Aiden and Max are identical twins. They do everything together. They were fortunate to make a very good friend while they were just little, Oliver. They have the sweetest relationship together and watching them hang out and be friends was a very sweet way to start the story.

Fast forward 14 years and the boys are just entering their twenties. Reconnecting is something they all needed. Oliver's home life was less than stellar when he was little, and it still is a little rocky now that he's more grown up. Oliver wanted to have the happy home life that his best friends had. While Oliver wasn't exactly jealous of Aiden and Max's home life, it became Oliver's goal to have a family like that.

Aiden and Oliver had crushes on each other when they were little. But because they were little, neither really knew what they were feeling or if they should do anything about it. When they are reunited, those old feelings come back to the surface. But now that those two have a connection that is deepening, how will Aiden and Max cope with the changes in their own relationship?

This story has such a great dynamic. It is about family, love, friendship, and acceptance. I really enjoyed seeing the boys figure out what they wanted personally and from each other. The family dynamic is not overdone and overall, this is a great coming of age story.


Ruthie – ☆☆☆
This is a very sweet coming of age novel involving three best friends. Two, identical twins Aiden and Max, have been together literally their whole lives, and have caring, loving professional parents. Oliver met them as a young boy but moved away when his always arguing parents finally divorced. As a boy, he loved the calm and happiness of their home, as well as having a crush on Aiden. Fast forward to age 20 and they meet up again as Oliver's dad has moved back to the area.

Now we deal with three young men who kind of want to recapture the innocence and fun of their boyhood, yet Aiden and Oliver are clearly attracted to each other. Max suddenly feels that he is losing his twin, and everyone's emotions go into overdrive. We hear the story from all three perspectives, and I enjoyed the fact they all learned from each other and had a new, adult view on what happened in their past, and maybe the direction of their futures.

Quinn Anderson earned a master’s degree from the University of Dublin in Ireland and is also a University of Florida alumna with a bachelor’s degree in psychology. She began writing books, poetry, and fan fiction at fourteen years of age and was first published at nineteen. Her favorite authors include Gail Carson Levine, Libba Bray, Tamorra Pierce, and T.A. Barron. A nerd extraordinaire, Quinn draws inspiration from pop culture and makes far too many obscure references. Quinn’s favorite thing to write is witty dialogue, and her favorite thing to read is a slow burn.

Reviewers on the Wicked Reads Review Team were provided a free copy of Fourteen Summers by Quinn Anderson to read and review.
Posted by Wicked Reads at 11:59 AM