If high school has taught mathlete Jade Aaron anything, it's that nerds never get the guy.

So when rock star Lennon Pryor starts pursuing her, it's not rocket science. This doesn't add up.

But he's also the world's biggest player. Being with him would be a bigger mistake than 2+2=5.

Until graduation night, when a reckless moment leads to a reckless kiss. And now Jade's falling for the one guy destined to break her heart.

Disclaimer: This Entangled Teen Crush book contains one epic party, complete with every high-schoolers-gone-bad shenanigan, and two opposites with nothing in common and nothing to lose... except their hearts.

Each book in the Grad Night series is a standalone story that can be enjoyed out of order. 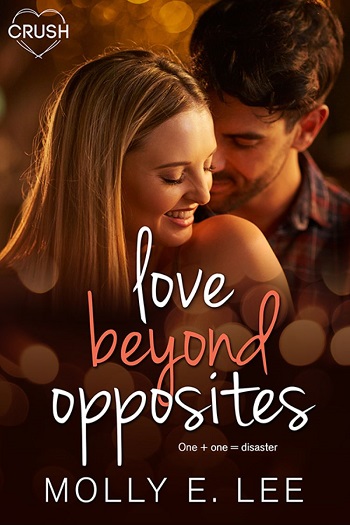 Erica – ☆☆☆☆☆
Molly E. Lee is a new-to-me author, which means I read the third installment of the Grad Night series as a standalone, with no confusion at all. I am beyond curious to read the first two installments and others by this author.

Teenagers believe girlfriend and boyfriend means someone you think is hot that you go on dates with, not realizing there is a more important part of that compound word, other than girl or boy... friend.

The Rock Star & the Mathlete.

Lennon spent the whole of his high school career avoiding the girl he truly wanted, fearing he'd hurt her when he reached for rock-stardom. He fell into the trap of how a rock star should/would behave/act/react, instead of being himself, which only made him all the more of a broody heartthrob.

Jade is the quintessential geeky, awkward, one-of-a-kind girl. Born with the gift of numbers, the mathlete has a creative streak for illustration, particularly for graphic novels.

Both of them feeling pressure to fit into the boxes their parents try to fit them into, over their high school career, the math teacher's son and the math teacher's best student bonded, becoming friends over interactions three times a week, while ignoring their attraction.

A series of calamities on graduation night draws Lennon and Jade closer together, in a yummy, angsty page-turner of a novella, which I devoured in a single sitting.

Highly recommend to young adults and those young at heart, looking for an injection of the addictively sweet rush of first love.

Young Adult age-range: 12+, includes kissing, alcohol use not by the MCs, and profanity.

This is the third in a series, but can be read as a standalone. It's a sweet story about crushes, growing up, following your dreams, and learning to trust in yourself.

Jade is a shy nerd who is amazing with numbers. Her parents have worked incredibly hard to show her that their occupations are exactly where she needs to end up. Her mom is pushy and almost cruel at times and I really didn't like it at all. I thought that her dad was not a strong enough character to stand up to his own wife. Jade is trying very hard to please everyone around her – her teachers and parents – that she is losing sight of what makes her want to get up and get going every day.

Then you have Lennon. He wasn't ever a big brain. His dad is a teacher at the local high school and is head of the mathlete division – which means that Lennon gets to see Jade every week. What starts as a crush blossoms into songs and feelings that were long buried. Lennon is also trying to figure out what is the most important to him – his music or following his dreams – the big question becomes can he have it all?

These two have an epic night together with one mishap after another. It's a story that takes place over the course of one night but is so packed with emotions and events that it feels longer. I think that this was a great story, but more geared towards teenagers.

I do wish we would have had more time with them in the epilogue but know that you can only do so much in the pages. It was a story that was sweet and innocent, but packed a lot in to it.


Kris – ☆☆☆☆
Young adult novel about a hopeful, upcoming rock star and a super geeky mathlete. Jade and Lennon got to know each other from school and Jade's math club taught by Lennon's dad, the professor. Lennon has a one-track mind for his future. He wants to play music and college can wait. Jade is a genius in math and pressures by her parents to go that route are high, when all she wants to do is draw graphic novels. Lennon's dad asked him to leave Jade alone because Jade isn't the love ‘em and leave ‘em girl and Lennon isn't sticking around after graduation. The two are friends but they want to be more. Graduation night they end up on several crazy adventures together, all leading up to Lennon's showcase with the record executive at his huge party. All kinds of sidetracks ensue and while it's a fun night, I found the story to get a little monotonous. By 60% in, still nothing has really evolved between the characters or in getting Lennon to the party. I ended up getting "skimmy" on reading every word. Flash forward, a good story with a good ending and fun side characters. Just wanted the middle to move a bit faster, even for a novella.


Jordan – ☆☆☆
Love Beyond Opposites is the third book in Molly E. Lee's Grad Night series, but I read it as a standalone and I had no issues following the storyline. I really enjoyed Jade's character and I thought she was fun, relatable, and I especially loved that she was not only incredible with numbers, but that she was also talented in a more artistic way. Although I am usually a huge sucker for the whole opposites attract love stories, I wasn't as sold on Love Beyond Opposites as I thought I would be. It's not that I disliked Lee's book by any means, however, I just felt it was a little drawn out at some parts and most of those parts tended to be during Lennon's point of view. Honestly, I usually really enjoy it when authors write with a dual point of view because I think it tends to give more of a big picture view, but in this situation, I almost wish it was more of just Jade. Maybe if I had read the previous two books in the series I would have developed more of an appreciation for Lennon?

Jade Aaron, the mathlete, and Lennon Pryor, the rock star, have been dancing around each other since their freshman year, but that all changes on graduation night when a series of events leads to Jade and Lennon spending the evening together. As the night progresses, one bold action leads to a reckless kiss, but a rock star falling for a mathlete just doesn't add up.

I liked reading Jade and Lennon's love story, however it just didn't quite end up being my perfect equation. That being said, I still liked Lee's writing style and I would be interested in reading what she does in the future!

Molly E. Lee is an author best known for her debut novel Edge of Chaos, and as a mentor at Pitch Wars – a program which connects promising writers to established authors in the community. Molly writes New Adult and Young Adult contemporary featuring strong female heroines who are unafraid to challenge their male counterparts, yet still vulnerable enough to have love sneak up on them. In addition to being a military spouse and mother of two + one stubborn English Bulldog, Molly loves watching storms from her back porch at her Midwest home, and digging for treasures in antique stores.

Reviewers on the Wicked Reads Review Team were provided a free copy of Love Beyond Opposites (Grad Night #3) by Molly E. Lee to read and review.
Posted by Wicked Reads at 6:59 AM