Confessions of a Queen B* by Crista McHugh

Alexis Wyndham is the other type of Queen B—the Queen B*tch.

After years of being the subject of ridicule, she revels in her ability to make the in-crowd cower via the exposés on her blog, The Eastline Spy. Now that she's carved out her place in the high school hierarchy, she uses her position to help the unpopular kids walking the hallways.

Saving a freshman from bullies? Check.
Swapping insults with the head cheerleader? Check.
Falling for the star quarterback? So not a part of her plan.

But when Brett offers to help her solve the mystery of who’s posting X-rated videos from the girls’ locker room, she’ll have to swallow her pride and learn to see past the high school stereotypes she’s never questioned—until now. 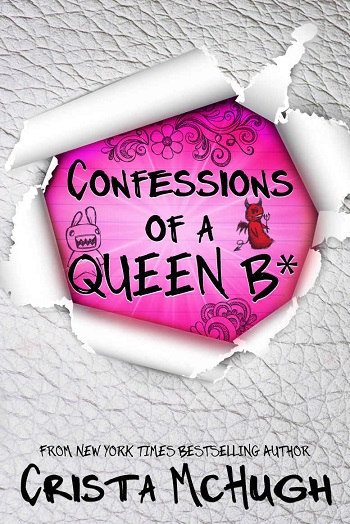 Erica – ☆☆☆☆☆
Crista McHugh is a new-to-me author, hooking me from page one. The writing style was fluid, with swift pacing, causing me to read feverishly to see what happened next.

Our narrator is Alexis, the crusader of truth. After being betrayed/bullied by her childhood best friend – only a best friend has the ammunition to truly annihilate you – Alexis formed, not only a thick skin, but the persona of a Queen B*, not to be confused with Queen Bee.

Alexis is harsh, unforgiving, seeking justice, not vengeance/revenge. She is just, sticking up for the those who are bullied and treated poorly, especially by the popular crowd in school. But her world is knocked off its axis when she has to partner in Health class with Brett – the golden boy, quarterback, presumably the boyfriend of the ex-BFF-betrayer.

Alexis blogs the dark and dirty of the popular crowd, naming names, including the faculty of the school for their wrong-doing, but she's a difficult girl to get to know.

This fast-paced read took the reader on a journey as Alexis had to find a balance between being so guarded she didn't allow anyone in, but not so open she allows herself to get hurt. She tries to keep her ethics in check, when normally something so black and white isn't as it appears to be.

The storyline is a bit more mature than most, but I believe it's appropriate for younger readers, as they are in the trenches of junior high and high school, experiencing these events on a daily basis. Alexis shows the reader right from wrong, and all the various shades of gray in between.

There's no doubt about it – I'm off to one-click The Queen B* Strikes Back.

Crista McHugh is an award-winning author of fantasy and romance who writes heroines who are smart, sexy and anything but ordinary. She currently lives in the Audi-filled suburbs of Seattle with her husband and two children, maintaining her alter ego of mild-mannered physician by day while she continues to pursue writing on nights and weekends.

She is an active member of the Romance Writers of America (including the Greater Seattle Chapter and the Seattle Eastside Chapters), and Romance Divas.

Just for laughs, here are some of the jobs she’s had in the past to pay the bills: barista, bartender, sommelier, stagehand, actress, morgue attendant, and autopsy assistant.

And she’s also a recovering LARPer. (She blames it on her crazy college days)

Erica reviewed her personal copy of Confessions of a Queen B* (The Queen B* #1) by Crista McHugh for this post.
Posted by Wicked Reads at 6:30 AM