Tessa McCaide has had it up to here with supernaturals. As the only half witch/half alpha werewolf around, she’s the obvious choice for ambassador to the humans when the magical communities seek to escape the shadows for good.

But coming out isn’t as easy as sending a press release. Vampire attacks are all over the news as the power-hungry witches play with dangerously dark magic and Tessa can’t promise any human safety when she and her friends are so busy battling for their lives.

Luciana leads the corrupt witches, and even though she failed to steal Tessa’s magic, she’s just getting started on her crusade for magical domination. Countless covens are turning dark, and if their demonic summoning isn’t stopped, it could mean the end of everything.

Tessa’s allies, including her mate Dastien, are ready to fight, but they’re no match for Luciana’s power. A little help (and ancient Inca mojo) from Tessa’s cousin, Claudia, may give the side of good a chance if she can make it home in time, but stopping the war is no longer an option.

When witches and wolves fight, no one wins. Only time will tell who will still be standing after the last spell is cast. 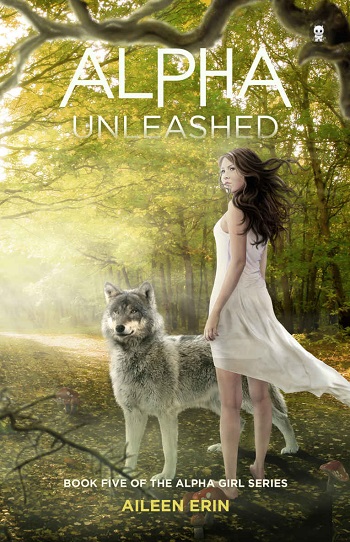 Jordan – ☆☆☆
I have read all the previous books in the Alpha Girl series by Aileen Erin. I have easily grown to appreciate this series and all the characters in this series! Book #5, Alpha Unleashed, switches back to Tessa from book #4, Bruja, which focuses on Claudia and her journey in Peru. Personally, I think if you wanted to you could just skip book #4, unless you're really invested in Claudia's character and want to know more about her. I will say that this last one kind of felt a little anti-climactic compared to what I was expecting. I just felt like everything was finally coming to a head with Luciana and then it was over. However, I did enjoy seeing how Tessa and Dastien's relationship has grown over these past few books, but I wish it didn't feel like they were moving at such a snail’s pace. I guess I had high expectations and unfortunately, this one didn't quite live up to them.

Even after failing to successfully steal Tessa's magic, Luciana has not given up and she's just getting started. Luciana's demonic summoning must be stopped or it could be the end for everyone. Tessa and her friends are ready to fight back, and with a little help from Claudia, Tessa's cousin, they may just be able to win if she can make it home in time.

All in all, I enjoyed Alpha Unleashed, but I definitely didn't like it as much as I liked Becoming Alpha, book #1, which has been my favorite so far. The past two books just really haven't wowed me much. However, I am slightly curious about the next book, which will feature Meredith and her mate, Donovan. Overall, I'd give Alpha Unleashed 3.5 stars.

Aileen Erin is half-Irish, half-Mexican, and 100% nerd—from Star Wars (prequels don’t count) to Star Trek (TNG FTW), she reads Quenya and some Sindarin, and has a severe fascination with the supernatural. Aileen has a BS in Radio-TV-Film from the University of Texas at Austin, and an MFA in Writing Popular Fiction from Seton Hill University. She lives with her husband in Los Angeles, and spends her days doing her favorite things: reading books, creating worlds, and kicking ass.

Jordan reviewed her personal copy of Alpha Unleashed (Alpha Girl #5) by Aileen Erin for this post.
Posted by Wicked Reads at 7:00 AM