Trina Clemons needed the money. Why else would she - the most organized, prepared student in school - spend the summer as a nanny and partner with the biggest slacker ever? Now she's ready to tackle nannyhood with her big binder of research and schedules. Just don't ask her about the secret job of "fixing" the bad habits of a certain high school player...

Slade Edmunds prefers easy hook-ups, and Trina is definitely not his type. She's all structure and rules, while Slade wants to just have fun. Fortunately, Trina has no idea about the bet Slade made with his best friend that he can totally get her to unwind by the end of summer...

Then the weirdest thing happens. There's chemistry. A lot of it. But nothing gets between a boy and a girl like a big, fat secret...

Disclaimer: This Entangled Teen Crush book contains a straight/gay BFF bromance, an irresistibly kissable bad boy, a good girl who wants to be kissed, some epic babysitting fails, and the occasional f-bomb. 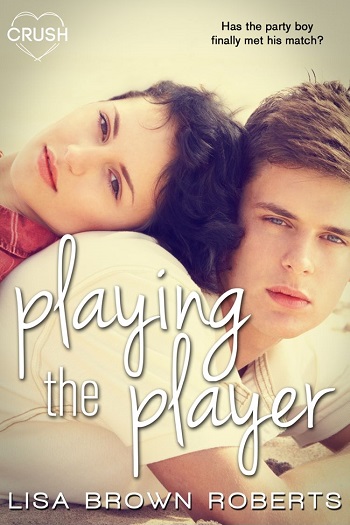 Lisa Brown Roberts is a favorite of mine in the young adult genre, finding her teen characters to be realistic role models, and the narrators of Playing the Player are no different. As an adult reading this genre, I believe teens will devour this book, as well as a more mature audience.

Trina is a hard-working, serious girl, who's as equally flawed as she is good. A well-rounded, human character with pain and hopes and dreams.

Slade is a slacker who has no idea what he wants out of life. He's a down-to-earth, uninspired charmer who can wrap anyone around his finger. But no matter how big of a player he comes off to be, he has a good heart and a conscience.

Trina and Slade create the perfect balance as they get to know one another on the pages of the novel. A bit of a love-hate, push-pull chemistry and tension as they partner in their nanny duties. Both have a secret that will hurt the other's feelings, creating delicious angst that rides along the journey with the characters, both feeling guilty.

As the driving force between the couple, the kids were a hoot, the BFFs were the voices of reason, and the parents were trying their best, even if unconventionally. All around, Playing the Player was a good story, with strong characters, and the budding romance of a sweet crush.

I read the book in one sitting, a few times experiencing a gamut of emotions: heart-clenching, gut-twisting, and barks of sharp laughter at the awkward encounters.

Recommended to fans of the Young Adult genre.

Lisa Brown Roberts still hasn’t recovered from the teenage trauma of nearly tweezing off both eyebrows and having to pencil them in for an entire school year. This and other angst-filled memories inspire her to write YA books about navigating life’s painful and funny dramas, and falling in love along the way.

Her almost forever home is Colorado, though she occasionally pines for the days when she lived within walking distance of the Pacific Ocean. Her house is full of books, boys, four-legged prima donnas, and lots of laughter.

Erica reviewed her personal copy of Playing the Player by Lisa Brown Roberts for this post.
Posted by Wicked Reads at 6:30 AM