The Ongoing Reformation of Micah Johnson by Sean Kennedy

There is no Plan B.

After being outed in an especially brutal way and briefly running away from home, Micah Johnson has sworn to get his life back on the straight and narrow. Well, not so much straight, but you know what he means.

Unfortunately the path to redemption is not an easy one. With fights at school and on the football field and an all-round snarky attitude as his number one defense mechanism, will Micah survive the school year and the training camps to achieve his dream of making the national draft and becoming a professional AFL player?

His mentor, Declan Tyler, believes in him, but Micah wishes he had the same confidence in himself. Only time will tell if the ongoing reformation of Micah Johnson will be successful. 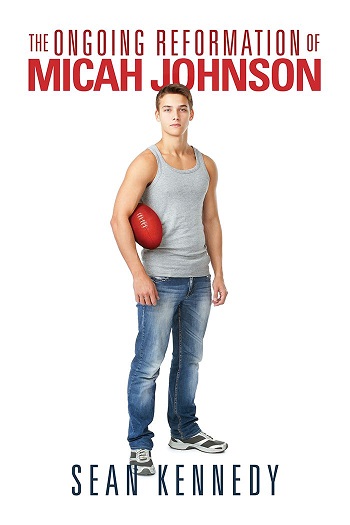 Sarah – ☆☆☆☆
Micah Johnson is a fabulous character. Obnoxious, insecure, and arrogant, he is a wonderfully memorable anti-hero. This story of Micah’s progress from complete asshole to not quite as much of an asshole is alternately funny and frustrating.

Readers will spend most of the story cringing as Micah continually makes bad situations worse. He alienates his friends, antagonises the bullies, and constantly reaffirms his asshole reputation. For most of the book, it is almost impossible to like Micah. I had some empathy for the homophobic behaviour Micah faced – until his reactions made the situations worse. This is a story of personal growth and I actually really liked the absence of any sort of ‘come to Jesus’ moment. Micah’s progress is pretty limited. As a result, he feels like a real kid rather than a literary hero. He is far too familiar and his mistakes are painfully funny. I may not have liked him but there were many moments where I completely loved him.

This is very much a sports story. In his last year of secondary school, Micah is preparing for the AFL draft. The story tracks him from the end of school through summer selection camps. Many of the sports tropes in this story are a bit tired and the blatant homophobia feels outdated (though maybe not in Australia). Sports fans will enjoy the competitive tension and I found this a welcome change from all of the books about traditionally American sports.

I am annoyed that this book is marketed as the first in a new series. If I hadn’t read the Tigers and Devils series first, I would have been lost. As it is, I read the earlier books some time ago and I still found myself trying desperately to recall events and characters that the author assumes readers will remember. This is not the start of an autonomous series. It is an extension of the Tigers and Devils series and I really could have used some recap summaries at the start of this story because it took me a long time to properly get into this book.

A word of warning: as this is listed as the first in a series, I tried to read it shortly after its release. After three attempts, I realized my error. While it's listed as the first, it's a spin-off of an adult series (Tigers and Devils). I understand listing it separately, as it is geared more toward younger readers, with a younger narrator, it's nearly impossible to get heads or tails without reading the Tigers and Devils series first. Micah's journey 'begins' during Tigers on the Run (Tigers and Devils #3), as is obvious by the 'ONGOING' in the title. So my warning is to readers thinking this is truly the first in a series – it's not. Go read Tigers and Devils first.

After reading books #1 and #3 of Tigers and Devils, I restarted The Ongoing Reformation of Micah Johnson with great ease now that the info-dumpage from past books makes a whole lot of sense. I felt connected to the environment and the characters, and was able to read as if this was book #4 being narrated by Micah.

Micah is a difficult character to enjoy. He's arrogant and irritating, all a cover for his insecurities. While he wasn't a pleasant narrator, he felt real – emotions dictated by human nature. Every interaction is tainted by Micah's antagonism, no matter with who or whether they are being nice to him. This makes for a stressful read, where it's with great difficulty for the reader to connect with the narrator, because he rubs everyone wrong – friends, family, enemies, bullies – the reader. No matter how stressful to read, the author is authentic with Micah's personality, never deviating from the uncomfortable nature.

Micah encounters homophobia as he finishes out his high school career, enters camps, to prepare for the AFL draft. Heavy on Micah's personality, The Ongoing Reformation of Micah Johnson is also a sports story. One of the first I've read where it's not just used as a prop to propel the main character to a love interest, with a few passages to affirm it in the sports genre. Light on romance, Micah is an athlete dealing with homophobic and closeted jocks, while simultaneously reveling and fighting his antagonistic nature.

Recommended to LGBTQ fans, who enjoy reading coming-of-age characters, with a story based on character development instead of focused on romance and between-the-sheets action.

SEAN KENNEDY lives in Perth, Western Australia, but his heart still belongs to his hometown Melbourne—which is also the home of Simon Murray and Declan Tyler from his series Tigers and Devils. A disciple of cult leader David Lynch, Sean is breathlessly awaiting the revival of Twin Peaks in 2016.

Reviewers on the Wicked Reads Review Team were provided a free copy of The Ongoing Reformation of Micah Johnson (Get Out #1) by Sean Kennedy to read and review.
Posted by Wicked Reads at 10:59 AM