Be careful who you keep secrets with, especially in picture-perfect Cherry Grove, a place where average isn’t good enough, and nothing is what it seems.

Lexi Welks wants two things—respect and a college acceptance letter that’ll get her out of too-good-to-be-true Cherry Grove. The problem is that the nasty, life-ruining secret she shares with Monica Sanders is about to go public. If their ugly truth comes out, her plans for college—not happening. And that’s only the beginning of her end.

Monica is the kind of student teachers adore—well-behaved, hard-working and always following the rules. She’s the kind of friend other girls follow—well-dressed, popular and always knowing the right thing to do. If only they knew the truth about her. The truth Lexi found out the hard way, after spending the past summer letting Monica talk her into doing things she knew could come back to ruin her.

Now it’s the first week of school and one of the seniors is missing. Lexi knows a thing or two about the circumstances of his disappearance, but she’s not talking. Neither is Monica. But wicked truths have a way of crawling to the surface and tearing through the most careful plans. 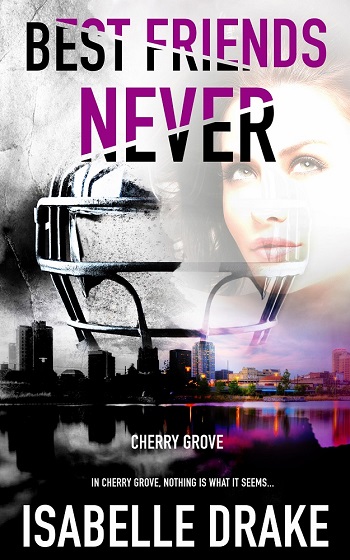 Erica – ☆☆☆
Isabelle Drake is not a new-to-me author, having read some of her racier titles many years ago, so I was surprised to find this young adult novel. The transition was done well.

The beginning flowed steadily, the middle dragged, and the ending was chaotically rushed, leaving me feeling off-kilter.

Best Friends Never is between two friends who were up to no good during the summer. With it now being fall, our narrator – Lexi – and her ex-friend Monica are butting heads. But from page one until the end, the reader never truly learns why.

I enjoyed Lexi for the most part, able to empathize with her and connect. A girl who lost her father at a young age, now has a step-father who comes and goes, hurting her mother time and time again as he pops in and out of their lives. When he comes back, Dale acts as if he is Lexi's real dad, only more overbearing and it feels like a betrayal to her because her mother won't stand up for her. Lexi's mom is the classic doormat.

Not wishing to ruin the plot with an overview or by giving details of what I did and didn't like, as this is a mystery/suspense young adult novel – a classmate is missing at the start of the novel, and then other bad things begin to happen throughout the book, with Lexi a central point.

To be blunt about why I could only give 3 stars, when I believe the intended audience would probably overlook inconsistencies and holes, by book's end, after reading several hundred pages, the reader is not rewarded with what happened, why it happened, or who did it. Not only are there no real answers, I have absolutely no idea what happened in the first place. For the sake of drawing it into another novel, this did the opposite of whet my appetite for the next. It totally turned me off not to get at least what happened. I didn't need to know who did it or even why, but the WHAT would have been nice to know. Yes, Lexi assumes by book's end the who, but even then she doesn't know. The reader should get some sort of a payoff for taking hours of their time to get some answers. I wasn't asking for all of them to be revealed, but something should have been expected.

I'm on the fence on whether or not I will read the next in this series. Recommended to young adults, as I believe most adults will have a similar reaction to the content of the book.

Isabelle Drake got her start writing confession stories for pulp magazines like True Confessions and True Love. Since publishing those first few stories she has written in many genres, but tends to write about everyday people in extraordinary situations.

When away from her keyboard, she likes watching classic horror films, especially Hammer films such as the Karnstein Trilogy, and reading (of course). An avid traveler, she'll go just about anywhere—at least once—to meet people and get story ideas.

Reviewers on the Wicked Reads Review Team were provided a free copy of Best Friends Never (Cherry Grove #1) by Isabelle Drake to read and review.
Posted by Wicked Reads at 10:30 AM