Truth or Dare was never this much fun...

Annie McFarland is sick of being a shy nobody. A session at summer camp seems like the perfect opportunity to reinvent herself—gain some confidence, kiss a boy, be whoever she wants to be. A few days in, she’s already set her sights on über-hottie Kyle. Too bad her fear of water keeps her away from the lake, where Kyle is always hanging out.

Jacob Fazio is at Camp Pine Ridge after one too many screw-ups. Junior counseling seems like punishment enough, but the rigid no-fraternizing-with-campers rules harsh his chill. When a night of Truth or Dare gets him roped into teaching Annie how to swim, she begs him to also teach her how to snag Kyle.

Late-night swim sessions turn into late-night kissing sessions...but there’s more on the line than just their hearts. If they get caught, Jake’s headed straight to juvie, but Annie’s more than ready to dare him to reveal the truth. 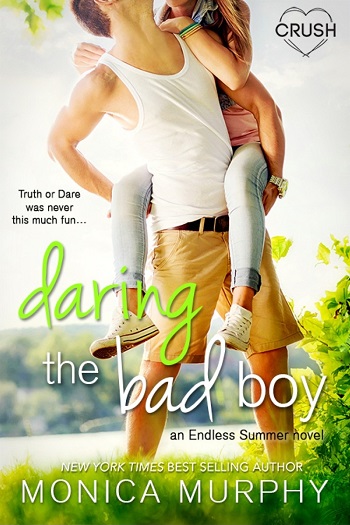 Jordan – ☆☆☆☆
This felt like a perfect book for Monica Murphy's YA debut and I look forward to seeing what she does in the future. Daring the Bad Boy was such a sweet young adult romance and I really enjoyed the fact that we got both Annie and Jake's points of view. I think young readers will have no trouble relating to Annie and falling in love with Jake.

Annie, is a shy 16-year-old that decides to go to summer camp in hopes of gaining some confidence and maybe overcoming her fear of water. Jacob (Jake) has gotten into trouble one too many times and his father convinces the judge to let him do community service as a counselor at Summer camp. It's here that he somehow finds himself blackmailed into teaching camper Annie to swim. Now, as long as nobody finds out that he's breaking the one rule he was given about fraternizing with the campers, everything should be fine, right?

Occasionally, young adult romances can be such a hit or miss for those of us in our twenties, and as an older reader, this one just made me feel really OLD. I personally only ever went to summer school like once and I'm pretty sure I was 13 or younger, but maybe high schoolers do these days? Does this mean I'm getting old? Regardless, it's not that I didn't like Daring the Bad Boy, because I did, but as an older reader, it just seemed more suited for a younger audience. I loved seeing how much both Annie and Jake's characters grew, but Annie's character just seemed so young at first. All in all, it was a sweet story and I'd give it a 3.5-star rating.


Jacki – ☆☆☆
This was a great read for the summer. The camp setting definitely kept it just right. I absolutely enjoyed the story and had no problem right through to the end.

As an adult reader, I found the story to be refreshing. It was sweet and realistically innocent. The characters' thoughts and emotions were nicely done and age appropriate in comparison with some I've read lately.

Annie has suffered through a tragedy in the past that formed the person that she is in the present, but she's determined to change that. She's ready to step out of her comfort zone and push herself towards her goals. The only problem, she's complicating everything herself.

Jacob also has had a rough past. Some bad decisions have landed him in trouble that he didn't want in the first place. He's now got the reputation of a bad boy, but he's just a wounded boy underneath.

They both have a lot of soul searching to do this summer and just maybe, they could help one another out.

I enjoyed this book. It was sweet, entertaining, and a nicely balanced mix of teenage fun and emotions. I'd definitely recommend it.

Monica Murphy is a new-to-me author, and right from the first page I knew I'd love this book. I was immediately hooked. As soon as I was finished, I checked out the author's backlist for my future reading enjoyment.

Daring the Bad Boy is a perfect summer read, especially for young adults who want to feel the warm and fuzzies of budding love. But also perfect for those young at heart who wish to be transported back to a more innocent time, where they can relive the angst and anticipation of having a crush, and getting that first kiss was the only thing on your mind.

Annie was quintessentially a teenage girl. She was scared, insecure, yet very brave. She made mistakes, but apologized and learned a lesson. She was crushing on a boy who she didn't know just because everyone else thought he was hot and wanted him, but she admitted it to herself how that was shallow. I appreciated the author for pointing it out, as I felt it a good moral for young adult readers. Why are you crushing on the guy? If it's looks, or because everyone else wants him, that says a lot about how shallow you are. Like him for him, and expect the same in return.

Annie is terrified of water after losing her baby brother. At 16, she decides to no longer live in fear, choosing to go to summer camp... summer camp that involves swimming. Annie's scared yet brave attitude brought me back to how I was terrified of my own shadow but would still just 'do it' to get it over with.

Daring the Bad Boy has two narrators: Annie and Jacob. Jacob is the classic wounded, brooding boy every girl wants to tame, but at his core, he's a really genuine person. But there is also a hottie named Kyle, who blinds Annie with his looks. Obviously it's no surprise who Annie chooses, seeing as how we only have two narrators. That aside, I did like Kyle, even if he was written as dumb as a box of rocks, and it was frustrating that Annie was forcing her crush when it wasn't organic. I got the vibe (but it wasn't shown) that Kyle actually had a thing for the Australian lifeguard, as he mentioned the guy's hotness and wanted to pull a prank to get the guy's underwear. But that's neither here nor there – just an observation.

Instead of going on and on about how Daring the Bad Boy brought me back to the overpowering sensation of being a 16-year-old girl in full-blown infatuation-mode, I'll post my favorite quote.

...My father told me when I was around thirteen that I should watch out for the quiet girls. "They'll sneak up on you and blow your mind. Not only are they smart and won't put up with any of your shit, but they're usually beautiful, too. You just don't realize how perfect they are because they're so damn quiet all the time. They'll sneak their way right into your heart. Once that happens, you're done for," he'd said.

At the time, I thought he was full of crap. What did he know about the quiet ones? They were boring.

But now, staring at Annie, thinking about how she was sneaking up on me and she didn't even know it, I realize that maybe he was right. Which meant I was totally done for... – Jake.

Young Adult age-range: 13+ due to kissing and a handful of f-bombs. 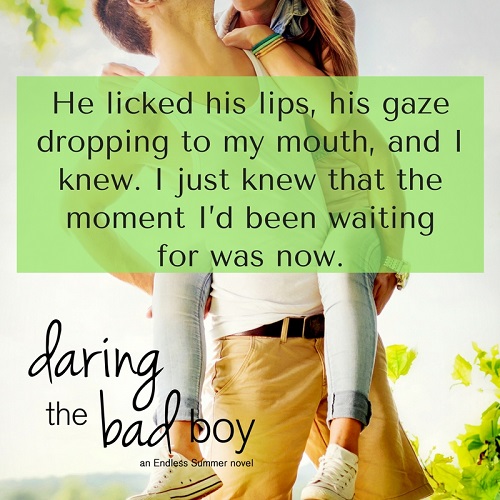 New York Times, USA Today, and number one international best-selling author Monica Murphy is a native Californian who lives in the foothills below Yosemite with her husband and children. A workaholic who loves her job, when she’s not busy writing, she also loves to read and travel with her family. She writes new adult and young adult romance and is a firm believer in happily ever after. She also writes contemporary romance as USA Today best-selling author Karen Erickson. 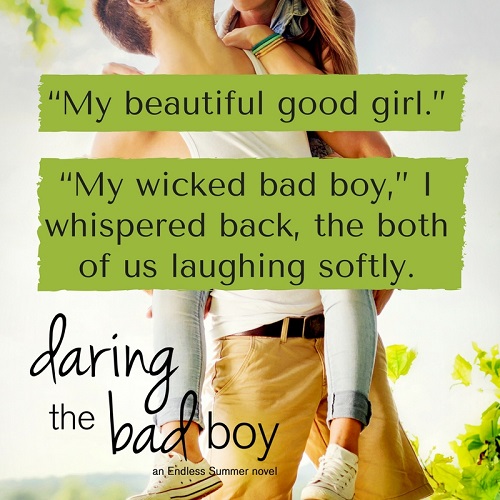 Reviewers on the Wicked Reads Review Team were provided a free copy of Daring the Bad Boy (Endless Summer) by Monica Murphy to read and review.
Posted by Wicked Reads at 7:00 AM