Seventeen-year-old Isaiah Martin knows what they say about good intentions, and he finds out it’s all true. After all, he had the best of intentions when he stepped in to stop a friend from making a terrible mistake, but when he’s caught with his friend’s gun, no one believes him. As punishment, Isaiah is forced to pack his bags and join his missionary father in politically unstable Cameroon, Africa.

Isaiah’s father also has good intentions, and he devotes all his time to them, so he sends Henry, a mysterious and attractive do-gooder, to act as Isaiah’s chaperone—and hopefully keep him out of trouble. But once again, the best-laid plans quickly go awry and Isaiah and Henry are abducted by enemy soldiers. If they want to live through their ordeal, they’ll have to work together and learn to trust each other until they’re rescued—or come up with a plan to save themselves and hope, for once, nothing goes wrong. 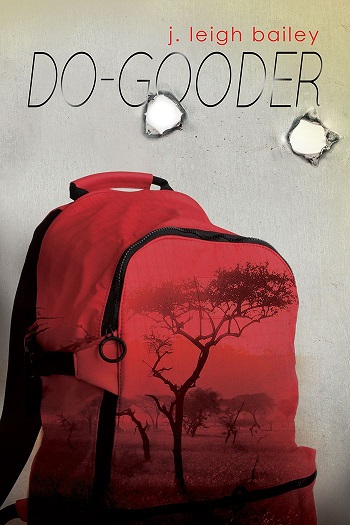 Angela – ☆☆☆☆
Having read a couple of Bailey’s M/M new adult romances, I was excited about the prospect of discovering how well she could write a young adult story. As it turns out, the author’s writing style lends itself well to the young adult genre as this and the other books I’ve read demonstrate a clear focus on the characters as the driving force behind the story. Because I don’t know where else to mention it in my review, I want to give a nod to the author about how Isaiah’s diabetes is dealt with in the book – it is presented as a part of who he is and not as a barrier to him living his life, yet the author makes it clear that Isaiah’s diligence to his health is paramount without making his diabetes a character of its own (if that makes sense).

No good deed goes unpunished. That’s the premise of Do-Gooder, or at least that’s how Isaiah sees it as his butt is on its way to Africa for part of the summer as a form of intensive community service. Yeah, getting caught with a gun within 200 yards of a school was no laughing matter, but his mother’s legal prowess kept him out of jail, even if the alternative isn’t much better in Isaiah’s opinion. Isaiah’s outlook on the situation gets a little brighter upon meeting Henry, but that feeling is short-lived when the young men are waylaid by mercenaries on their trip back to the medical center. At first glance, this may seem a bit fantastical of a storyline, yet it’s the kind of incident that triggers tourist warnings for Americans throughout the world – no one is truly safe. While the direction the story takes revs up the action and adventure that will hold many a teen’s attention, it is Isaiah and Henry’s time as hostages that allows the author’s talent to shine because it’s when we see the characters develop. I don’t want to say much about their time as hostages because I don’t want to ruin the book for potential readers, but it’s not pretty; it’s no worse than many action movies I’ve watched, except that when they are subjected to violence, it’s not overly graphic in my opinion.

I should point out that an adult reader, and an astute young adult reader, will easily see the set-up for the action and adventure portion of Do-Gooder. However, Bailey writes it in such a way that the reader is meant to see what Isaiah and Henry do not, and understand why they don’t see it. Yet even knowing that something was coming, I was still taken aback by events as they unfolded. So while there is a certain level of predictability for the adult reader, it didn’t keep me from getting sucked into the story because of how Bailey writes Isaiah and Henry – they are what matters, they are why I’m reading the story, and it is their responses to the situation and their behaviors that moved the story forward. The bond that forms between the young men as they are faced with a situation right out of a movie or novel (*wink, wink*) is palpable, not only because of the danger they face together, but because they anchor one another to reality. As this is a young adult novel, there is no sexual content, with only a kiss being exchanged – and considering that the storyline is heavy on the action and adventure, it made sense that there was no more than that. While I do not pretend to know what, if anything, teens are reading these days, I suspect that Do-Gooder will appeal more to males than females because of the action and adventure aspects, particularly gay teens who may find themselves identifying with Isaiah and/or Henry. I thoroughly enjoyed this novel and hope that Bailey continues to contribute to the LGBT young adult genre.

Young Adult Recommendation: I’m going to say 14 and up as there is only a kiss shared between Isaiah and Henry, and the violence isn’t too graphic. Initially, I was going to say 12 and up, but there are a couple of discussions regarding Henry’s time as a rentboy and, while it happens off-page, it is clear that Henry trades his “services” for Isaiah’s insulin, hence the change in age recommendation.

J. LEIGH BAILEY is an office drone by day and romance author by night. She can usually be found with her nose in a book or pressed up against her computer monitor. A book-a-day reading habit sometimes gets in the way of… well, everything… but some habits aren’t worth breaking. She’s been reading romance novels since she was ten years old. The last twenty years or so have not changed her voracious appetite for stories of romance, relationships, and achieving that vitally important Happy Ever After. She’s a firm believer that everyone, no matter their gender, age, sexual orientation, or paranormal affiliation, deserves a happy ending.

She wrote her first story at seven which was, unbeknownst to her at the time, a charming piece of fanfiction in which Superman battled (and defeated, of course) the nefarious X Luther. (She was quite put out to be told later that the character’s name was supposed to be Lex.) Her second masterpiece should have been a bestseller, but the action-packed tale of rescuing her little brother from an alligator attack in the marshes of Florida collected dust for years under the bed instead of gaining critical acclaim.

Now she writes about boys traversing the crazy world of love, relationships, and acceptance.

Reviewers on the Wicked Reads Review Team were provided a free copy of Do-Gooder by J. Leigh Bailey to read and review.
Posted by Wicked Reads at 7:59 AM