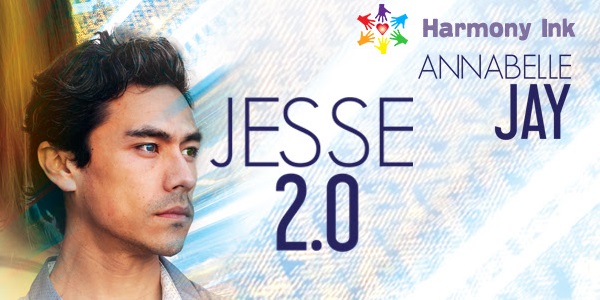 What if you aren’t the only you?

Shy and studious Maddy Stone faces just that question. Months ago he lost his boyfriend, Jesse, to suicide, and now he’s volunteering at a psychiatric hospital. When he intervenes to save a man there, he’s shocked to find a face he recognizes. It’s Jesse, who explains that he’s been cloned… by Maddy’s father. And when the reproduction technology duplicated him, he was ordered to avoid Maddy at all costs. Breaking that rule puts them both in danger.

Maddy, his girlfriend, Georgia, and Jesse—who Maddy calls Jesse 2.0—are on the run. But as the secrets continue to come to light, Maddy is faced with a decision—continue with his life or be the Maddy he was before technology intervened. 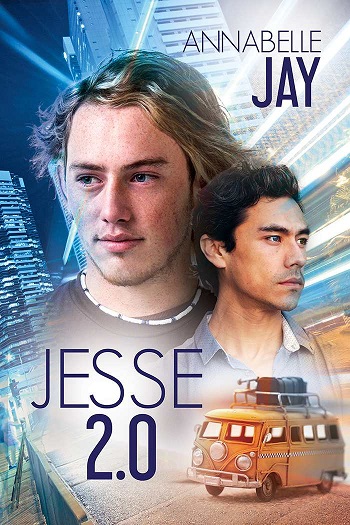 Anabelle Jay is a new-to-me author.

Jesse 2.0 is an interesting tale, set in a fast-paced novella. Madison is working at a clinic when he sees the last person on the planet he ever expected to see. Jesse. The love of his life who committed suicide and died.

The novella is slightly difficult to follow, a bit chaotic with the influx of information being lobbed at the readers, so fast that it's hard to digest it or make sure it even makes sense before being hit with the next revelation.

Set in a futuristic world a hundred+ years from now, it's not cloning per se. I came up with a better way to describe it – the author had the main characters debate it using a painting, when I wished they would have used a book instead. Copies of the same book are still the book itself. No one will ever say you didn't read the book because it's not the writer's personal manuscript. But to describe the process of the 'cloning,' I will use a fax machine. When you fax a paper, you retain the original, and the recipient now has a copy – the information it contains no less valuable or real because it's not the original. This is Jesse 2.0...

Teleportation is the advancement that led to the discovery of cloning humans. The dead could be duplicated, alive when they are teleported to a new location. (I think that's what the idea was.) However, when a live person teleports, they don't end up with two of themselves – hundreds if they teleport all the time. While I understood the concept, and rolled with it because this is science fiction, but that was always in the back of my head. Making me think of the fax machine, or copy/pasting anything and ending up with multiples – the original doesn't go poof, you end up with two and so forth. Not in regards to one dead and one alive, but to those who teleported to have brought about this advancement. It's probably me missing it – as I said, a lot of information in this fast-paced novella was thrown at the reader before they could digest what they read on the pages before.

Nonstop action-packed, with illegal scientific experiments for altruistic reasons that turn into pure evil, because the consent of the person they are 'fixing' isn't involved. Beneath the surface are the moral ramifications of the medical advancements, left up to the reader to mull over. There's also a plethora of emotions as Madison and Jesse connect, disconnect, connect, disconnect, with an ending that may leave readers reeling if the characters resonated with them.

Near the end, with all the twists and turns and betrayals and lies, it felt as if I was reading about avatars respawning in a video game, as if you had so many lives in the game of life, and this took the emotional punch away from me.

If there’s one thing author ANNABELLE JAY believes with all her heart, it’s that there is no such thing as too many dragons in a book. As a fantasy writer with few other hobbies—does being bribed to run with her partner or dancing awkwardly in the kitchen count?—she spends every day following her imagination wherever it leads her.

A hippie born in the wrong decade, Annabelle has a peace sign tattoo and a penchant for hugging trees. Occasionally she takes breaks from her novels to play with her pets: Jon Snow, the albino rabbit who eats all of Annabelle’s bookmarks; Daisy, the Angora rabbit who constantly tries to escape her cage; and Stevie, the crested gecko who climbs glass with the hairs on her toes.

During her day job as a professor of English, Annabelle is often assumed to be a fellow student playing a prank on the class—that is, until she hands out the syllabus. When people stop mistaking her for a recent high school graduate, she will probably be very sad.

Reviewers on the Wicked Reads Review Team were provided a free copy of Jesse 2.0 by Annabelle Jay to read and review.
Posted by Wicked Reads at 6:59 AM