Vaughn Yarborough is ready to trade the fame and glory of the international junior pro tennis circuit for college and a more settled life. First stop: spearhead a summer camp for underprivileged kids. The girl who’s agreed to run it with him has Vaughn more intrigued by the minute, but with the strict no-fraternizing rules, he’s got to figure out how not to fall for her.

When the boy Carlyn Sadowski has crushed on for years asks her to work with him for the summer, she has to pinch herself. When his world-famed coach offers her training for free, she can’t believe her luck. He could actually help her follow in her mother’s footsteps by playing college tennis. But when she finds out the catch is she’s got to convince Vaughn to go pro, Carlyn will have to decide between her dreams and the boy currently stealing her heart.

Disclaimer: This Entangled Teen Crush book features a super-hot sports star, the shy girl looking to grow her confidence on and off the court, and late-night shenanigans that would make your camp counselor blush. 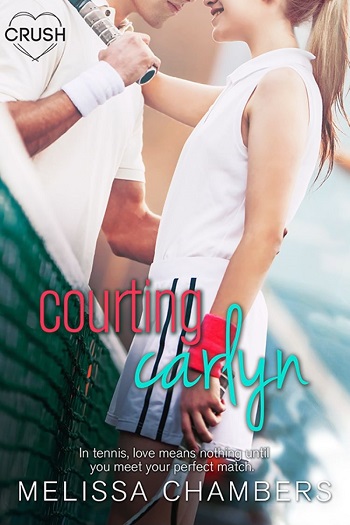 Erica – ☆☆☆☆
Courting Carlyn hit many of my favorite notes. A slight love-hate vibe in the very beginning. Summer Camp crushes. Angsty dilemmas. Warm and fuzzy of first love. The moral of doing what is just and right.

Carlyn's aspirations are to get onto the university's tennis team. The seventeen-year-old has an academic scholarship but longs to follow in her mother's footsteps in memoriam. The only issue is how she isn't from a wealthy family like her peers, rather working at the country club to use their facilities than being able to afford trainers and alike.

Vaughn is the 'it' boy, well on his way to being a superstar of tennis. Broody, secretive, and labeled a bad boy, clearly Carlyn has been harboring fantasies, just like every other girl in the vicinity. Too bad he thinks she purposefully lost them the doubles tournament to spite his trainer – bring the love-hate angst.

Thrust into running a summer camp together, Carlyn needs the training via Vaughn and his trainer, and the paychecks are much-needed too. But Vaughn is doing it to clear up his image, so he can attend the same university Carlyn is so desperately trying to get accepted onto their tennis team.

The side characters were engaging and original, creating the perfect backdrop to Carlyn and Vaughn's verbal banter and avoidance of wanting one another. The older couple who owns the camp wants no fraternization. The trainer is tempting Carlyn to manipulate Vaughn. Carlyn's dad is not a fan, of either boy superstar or the past superstar. Age-appropriate angst abounds in this first crush, warm and fuzzy novel.

I highly recommend to those who are addicted to the young adult genre, readers who enjoy a good sports theme, and fans of the author.

Melissa Chambers writes contemporary novels for young, new, and actual adults. A Nashville native, she spends her days working in the music industry and her nights tapping away at her keyboard. While she’s slightly obsessed with alt rock, she leaves the guitar playing to her husband and kid. She never misses a chance to play a tennis match, listen to an audiobook, or eat a bowl of ice cream. (Rocky road, please!) She’s a member of SCBWI and RWA including several local and online chapters thereof. She holds her B.S. in Communications from the University of Tennessee. 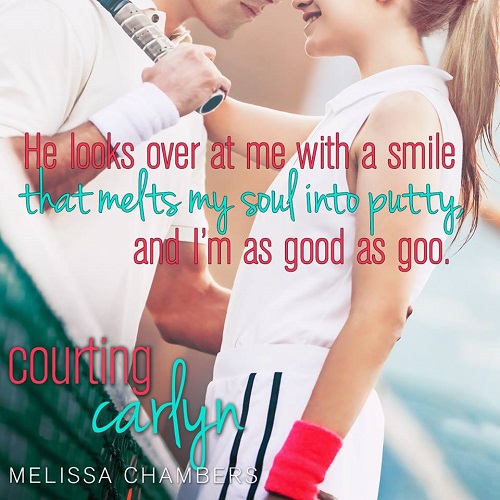 Reviewers on the Wicked Reads Review Team were provided a free copy of Courting Carlyn by Melissa Chambers to read and review.
Posted by Wicked Reads at 8:00 AM