Playing for the Other Team by Sage C. Holloway

Bryson just wants to make it through the last few weeks of high school alive. Graduation is on the horizon, his grades are decent, and his biggest worries are, in order, his baseball performance, his graduation gown color, and his weird hair. Everything seems on track – until two heavy realizations hit him right in the middle of his senior prom: He's gay, and he's in love.

Reserved artist Jasper turns him down at first, despite his feelings for Bry, but he offers help to ensure Bryson can start the next chapter in his life as the person he was always meant to be. However, Jasper struggles with his own demons. He has commitment issues and a past which won't let go of him, including a jealous ex-boyfriend who doesn't take kindly to his former flame being pursued by someone else. Soon, every day spells trouble for the gifted outsider, forcing him to rely on Bryson for support.

Bryson must pull together all of his resolve to navigate the minefield with Jasper. Together, they stand against bullies, homophobes, and graduation gowns that threaten to make them look like bananas. With luck, they might just make it out in one piece. 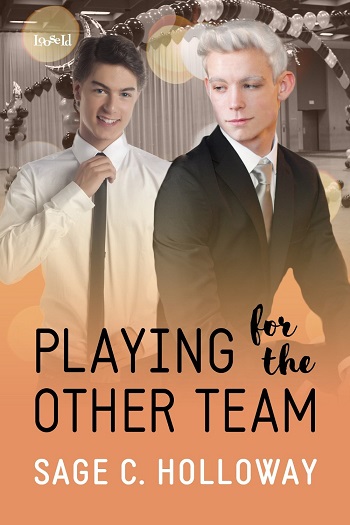 Erica – ☆☆☆☆☆
When I started Playing for the Other Team, it was 2 a.m. and I just finished a rare 4.5 star book. I meant to only read a few chapters to get my mind off the other storyline, only to find myself finished before sleep finally claimed me. Thoroughly addicted, page after page flew by without my notice.

Bryson is sweet, and Playing for the Other Team is his journey of realizing he's into guys, Jasper especially, and the steps of his coming out to his friends, family, and at school, all the while trudging through life lessons.

The novel was a quick, easy read, with fast-pacing and witty writing. The characters were both sweet yet flawed, and undeniably realistic. Flowing from the realization, to the want of Jasper, to the aftermath of coming out, I couldn't get enough.

Bryson & Jasper were great, as were their guy friends. But the girls... Girls. Sage C. Holloway wrote a gaggle of amazing female characters, and for that I can't be thankful enough. Instead as the villainesses as most MM authors portray girls/women, the ladies are the protectors and friends – the sympathizers. Each girl was individually characterized and awesome in her own right. But Jasper's little sister was one of the biggest sources of amusement written on the pages. As Jasper calls her – a tiny Liam Neeson. Do we need to make a dentist appointment?

At book's end, I wanted more but was thoroughly satisfied. I believe it will make a great comfort reread.

I need to admit this, when Playing for the Other Team was offered in our review group, I actually scrolled by due to the cover, but the author caught my notice. I had also read Spectacularly Broken, one of my favorites of the past year, and immediately signed up to read and review. With both Spectacularly Broken and Playing for the Other Team on my favorite list, I cannot wait to see what more Sage C. Holloway has in store.

Young Adult age-range: 14+ (older if not as emotionally mature, younger if they are) due to sexual content and situations.


Shannan – ☆☆☆☆
Prom night. Everyone always expects the greatest moments to happen on that night. It's supposed to be magical and filled with fun. You dress up and hang out with your friends, dance and have a good time. But what if you figure out you're gay in the middle of all of that and the one person that draws your attention is the one person to help you understand your new reality?

Bryson is coming to terms with his coming out. He didn't mean to blurt it out, especially to Jasper, the guy he's been crushing on. When Bryson learns he was unexpectedly outed by the one person who was supposed to have his back, he quickly learns not everyone is ok with his news.

I devoured Playing for the Other Team in one sitting. I am not usually a YA reader, but I am enjoying the subtle take on romance and attraction, a nice change up from my usual reads. It held my attention and in the end had me rooting for Jasper and Bryson.


Veronica – ☆☆☆☆
Bryson realises he is gay while watching Jasper, a guy in his art class, dance with a girl at prom. On what turns out to be an eventful night for Bryson, he comes out to Jasper. Can they become friends? Jasper is openly gay and agrees to support Bryson through his coming out.

Bryson struggles to survive his final year of High School. When the students find out about Bryson's sexual orientation, some are supportive and others are vile and homophobic. All the while, Jasper is there for Bryson and romance develops. But it isn't all roses. Jasper has problems of his own that impact their relationship.

I really loved the way this story was written. These adolescents felt real and their struggles were easy to relate to. I did feel the very end of the story was a little rushed but otherwise this was a great story.

Sage C. Holloway is a parent, sex-positive feminist, pet store employee and resident fruitcake. Her childhood dream consisted of being a writer and an astronaut, and so far, she is about fifty percent there.

She has one husband, who seems to be the only one capable of putting up with her on a regular basis, and one son, who bears a striking resemblance to the Stay Puft Marshmallow Man. She is also owned by three cats, who do an excellent job of assisting her by lying on her manuscripts whenever they can tear themselves away from lording over the living room. Sage loves glitter and loathes Wisconsin winters. She is delighted when she meets people who share her strange sense of humor.

Spectacularly Broken is her first novel.

Reviewers on the Wicked Reads Review Team were provided a free copy of Playing for the Other Team by Sage C. Holloway to read and review.
Posted by Wicked Reads at 7:00 AM