Carter Stevenson is looking forward to a fresh start in a new high school on the other side of the country. It’ll give him a chance to escape his reputation for twitching and stuttering. He’ll have the summer to himself in his new home in California, and in the fall, he won’t get involved in any activity that puts his Tourette’s center stage. He won’t stand out as different.

Ethan Hart is recovering from a traumatic brain injury, but it doesn’t dampen his enthusiasm or love for life. As soon as he sees Carter, who moves like the music Ethan sees between the clouds and the grass, he’s determined to become his friend, and then his boyfriend. And even if his parents say their romance can’t get physical, Ethan won’t let it stand in the way of falling in love.

Stepping into the spotlight was the last thing Carter ever wanted, but Ethan, along with a group of friends who like him just the way he is—tics and all—starts to change his mind.

Adapted as a YA edition of the award-winning novel Ethan, Who Loved Carter by Ryan Loveless. 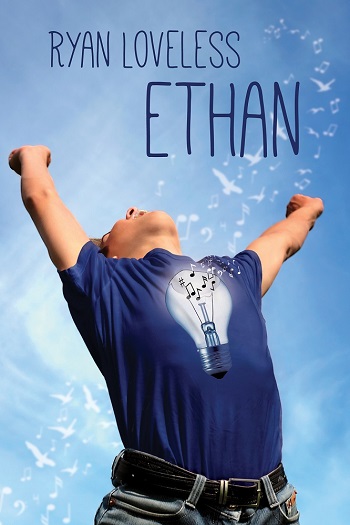 Ryan Loveless is a new-to-me author, and I found her writing style to be endearing, drawing out the important emotions in her character development, and life-centric, without any bells and whistles and unnecessary shock-value.

I had requested this book a few weeks ago – truthfully, I read it next as my reviewing schedule dictated, going in blind, not even knowing what genre Ethan belonged to, totally forgetting the blurb and whatnot. So it was a surprise from the start for me. Until two minutes ago, I didn't even realize this was a reinterpretation of sorts to Ethan, Who Loved Carter. So I'll have to check that book out in the future.

Ethan is narrated by Carter and Ethan. Carter is suffering with Tourette's Syndrome, and is bullied and mocked at school. He doesn't have many friends, all of them older, and mainly keeps to himself. Carter and his family move from the Midwest to California to start a new life, or maybe it's more like Carter decides to start living life and finally accepts who he truly is.

Ethan is Carter's neighbor, suffering from brain damage. There is a sense of grief surrounding Ethan's family over what they lost, as Ethan was destined to be a bright star. But Ethan isn't the same guy as Before – together, Ethan and Carter prove they're who they are now, and that's just as good, if not better.

Truth be told, seeing life through the lens of two boys suffering with their brains not functioning properly was a new perspective, one the author handled with compassion and plenty of research for accuracy.

The story itself revolves around both boys coming to terms with who they are, while Ethan deals with past demons. I don't want to give the plot away, but it's 100% focused on our narrators, heavy on the character development. The entire cast of characters are in a supportive role, realistically written, patient and understanding, and lend a feel-good vibe to the book.

I do need to point out something that may make some uncomfortable. While Ethan is 18, and Carter is a newly 16, some may find the sexual content difficult to swallow. At 15, Ethan had an accident that left him brain-damaged, no longer with a filter. He has needs, and he speaks freely about such needs. I have no doubt this is a common issue with this type of injury, but some readers may not be comfortable when they perceive Ethan to be a grown man with a child's mind (he doesn't truly have a child's mind – he just thinks differently than the societal norm). Some readers may see this as Ethan being taken advantage of, but I need to stress that Ethan is 18, and these are his decisions, and he is the initiator. Even I, who could wrap my mind around it, had a difficult time with this portion of the storyline – I understood it, tried to empathize with it, but still had a tough time. So just be warned.

Recommended to MM romance fans, particularly those who enjoy a story featuring characters outside of what society considers 'their' normal, with a hurt-comfort vibe. This is a young adult, coming-of-age storyline, with a supportive unit of family and friends, focusing more on overcoming/accepting mental disabilities rather than LGBTQ issues.

Young Adult age-range: 14+ but with parental discretion, as the novel does involve minimal sexual content/suggestions, and topics include past violence leading to disabilities, and bullying.


Angela – ☆☆☆☆☆
About six months ago, I listened to the audiobook edition of Ethan, Who Loved Carter, the adult M/M contemporary romance upon which Ethan is based. Having worked with persons with stutters and tics similar to those of Tourette’s Syndrome and individuals who have suffered a Traumatic Brain Injury (TBI), I recall thinking were it not for the sexual interactions, that Ethan, Who Loved Carter would have been a wonderful book for teens to read because it was not only a sweet romance, it was also a much needed lesson in diversity that’s often overlooked. While it’s a fictional tale of two men who find love because of their differences and not despite them, Loveless does a wonderful job of portraying Ethan’s Tourette’s and Carter’s TBI in a realistic fashion, thus providing the reader invaluable information in an entertaining way, making it more likely they’ll retain it. I applaud Loveless in reworking the story to make it appropriate for young adult readers and Harmony Ink for making such a beautiful tale available to them.

Ethan opens with one of Carter’s most embarrassing moments – his tic-riddled performance in a school-wide talent show. Carter considered the incident humiliating because singing and playing his guitar was one of the few times his tics were somewhat controlled, yet having the entire student body as the audience put more stress on him than he expected and resulted in an increased level of tics that interfered with his performance. Needless to say, he’s not all that upset when he learns that he and his parents will be moving in two weeks, as soon as he finishes out the school year. While getting to know new people is difficult for Carter, especially when his tics cause him to stutter, he sees a light at the end of the tunnel when he learns that his next door neighbor isn’t “normal” either – and he’s cute. Despite getting off on the wrong foot by inadvertently offending his neighbor, Carter befriends Ethan and soon finds himself caught up in Ethan and his family’s life. And what was intended to be a summer spent adjusting to a new place becomes so much more as Carter is quickly absorbed into Ethan’s life, introduced to Ethan’s music, introduced to Ethan’s friends and forming bonds with them, and learns that what he thought was love before, wasn’t even a pale imitation of what he feels for Ethan.

I absolutely loved Ethan. I said it before and I’ll say it again, Loveless has done an outstanding job in reworking Ethan and Carter’s story into a young adult romance. The issues of sexuality are still addressed, but done so in way that is appropriate for 16-year-old Carter – the dreaded sex talk with his father (hysterically awkward, by the way). Even better is that conversations about sex between Ethan and Carter are very open because that’s how Ethan is, straightforward and honest about what he wants, yet willing to listen to and respect Carter’s feelings about it, despite his lack of impulse control. One of the things that really struck me about Ethan is how the maturity level between Carter and Elliot (Ethan’s younger brother) were so different even though they were only a few months apart in age. Although Elliot has his moments of understanding beyond his years because of adjustments he had to make after Ethan’s TBI, he still has more of a teen mindset than Carter, whose Tourette’s has likely forced him to grow up quicker and develop a thicker skin so that most of the taunts and insults can be ignored. Even though I’d already experienced parts of their journey before, I loved being able to take this journey again with a young Carter and young Ethan as theirs is a beautiful story, no matter the intended audience.

RYAN LOVELESS is a farmer’s daughter. She has a BA in English from a private college in Illinois and a master’s degree in library and information science with an archival certificate from a university in New York. Raised in a conservative family, she was shocked and relieved when her coming out was largely uneventful. She has been writing since she could read and has always drifted toward M/M because she enjoys the relationship dynamics. It’s possible that her first story was about GI Joe. She wishes she still had that story.

Reviewers on the Wicked Reads Review Team were provided a free copy of Ethan by Ryan Loveless to read and review.
Posted by Wicked Reads at 6:59 AM