Weathering the Storm by Caitlin Ricci

Robbie’s dad has always been hard on Robbie and his brothers, but when their mom dies on Robbie’s sixteenth birthday, he becomes downright abusive. Robbie doesn't understand why his dad is so mean to him or why his brothers resent him for their mom's accident, but he desperately tries to hide the bruises. On top of that, after his dad's horse training jobs run out, he moves them to Colorado to their uncle's ranch in the mountains.

At Uncle Caleb's cabin, Robbie meets Sam, a boy whose family also lives on the property. Finally he has a real friend who shares his love of horses, but Sam is black and openly gay. Both traits incur Robbie’s father’s rage. When his dad attacks Robbie in front of Uncle Caleb for standing up for Sam and himself, all of their secrets are thrown out into the open, and Robbie's life is changed forever. 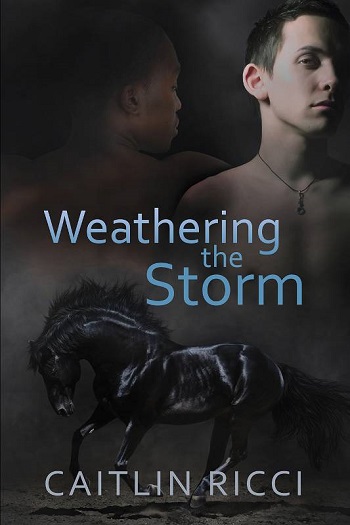 This was a hard story to read. Robbie's father is somewhat of a mean person, to put it nicely. This story is about growing up looking for constant approval. There are three brothers who are all show riders, but Robbie has it the hardest. His dad is constantly scrutinizing him, belittling him, hitting him.

I would say that this story is young adult – it's more about coming of age, accepting what you need, learning to navigate the world, and learning to trust yourself. It's difficult to read due to the father's propensity for violence. He strikes Robbie whenever he feels Robbie is deserving.

The brothers are somewhat cumbersome in the story and there is A LOT of growing up that is necessary for both. They treat Robbie very poorly throughout – the brotherly relationship is not very close.

Throwing in the relationship between Sam and Robbie, which is young, naïve, and juvenile, the whole story is cluttered. I wish that we had more of an ending – it felt abrupt. I am wondering if there will be more books, because the reader is left with a lot of questions.

Reviewers on the Wicked Reads Review Team were provided a free copy of Weathering the Storm (Robbie & Sam #1) by Caitlin Ricci to read and review. Review copy was purchased by the blog during a "freebie" promotion.
Posted by Wicked Reads at 7:00 AM