Inspired by the 1985's classic film Sixteen Candles, this book is a dose of light and heartwarming comedy, that's going to put a smile on your face and make you giggle all the way through. It's also a touching love story, so get those tissues ready! 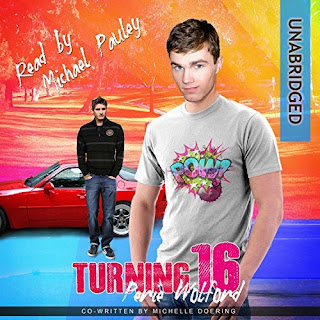 **Note: This book has been re-released as Sam Dorsey and His Sixteen Candles.

Angela – ☆☆☆☆
Tooooooo cute! In preparation for audiobook month, I was perusing the young adult titles in the Romance Package for a final title to round out our blog’s Saturday posts. I was actually looking for a standalone title, preferably M/M, when I stumbled on Turning 16. As someone who grew up on John Hughes’ movies, I was all over the Sixteen Candles reference that occurs in the audio sample; that it was narrated by Michael Pauley was a bonus. So when I sat down to write my review, you can imagine my surprise to learn that this is not only the first book in the series, but that it’s also undergone some changes since originally released and is now titled Sam Dorsey and His Sixteen Candles, which is an even better name. With that said, it doesn’t appear as though the overall story itself has changed, just some rebranding with a new title and cover, and as nice as the new look is, I’m not sure that it calls to the child of the 80s in me as much as the former cover does with its nod to the iconic scene in the movie, when Jake is leaning against his car. But as I’m not the target audience, the new covers are probably better suited for today’s teens who aren’t reminiscing for the 80s. Sorry for the word vomit but trying to suss out what book was what on Goodreads made this a bit of nightmare.

As for actual story, Turning 16 spans about a week, beginning the day of Sam’s 16th birthday in 1985. While most teens look forward to their sweet sixteen because it’s a milestone birthday, birthdays tend to bring nothing but bad luck for Sam, and this year it seems that Sam’s misery is going to be dragged about a bit as his birthday party must be postponed due to extended family issues. As we navigate the hazards that arise on Sam Dorsey’s birthday, it’s easy to see why he feels as though his birthdays are cursed. And yet… it appears that the universe might have a little bit of good in store for Sam when his crush begins to show some interest in him. Add to that, there’s also a budding new friendship with Mitch. And not only is Sam beginning to fantasize about him, but Mitch is rather persistent in them spending time together and in keeping Jake away from Sam. But as Sam thinks Jake and Mitch are both straight (maybe a little bi on Jake’s part), this sudden interest from two fronts makes it hard for him to figure out if he wants the guy he’s been crushing on for years, or does he want the guy who seems to be genuinely interested in him? And Sam’s biggest dilemma… When did everyone figure out he was gay when he worked so hard to keep it a secret!?!?!

As for the narration, I really enjoyed Michael Pauley’s performance in this one. I will admit that there was a couple of times when I got confused as to who was speaking because the level of vocal distinction I’m used to from Pauley’s performance wasn’t present in this audiobook, but this appears to be one of his early works. I was impressed by Pauley’s crooning… I so did not see that coming and I may have fangirled a little bit during those scenes – OHMIGOD!!! I also have to commend Pauley being spot-on with the teenage angst. Honestly, it’s hard to believe that this is same guy whose voice is so full of tension that it pulls me to the edge of my seat during romantic suspense and thrillers. But Pauley did an excellent job of making Turning 16 a delightful treat to listen to, complete with all of Sam’s awkwardness that I think Perie Wolford & Michelle Doering intended.

Hey... Hey you... Yes you! You Sir/Ma'am, are awesome. I myself, also enjoy dabbling in the fine art of awesomery, so why not join me on my vast literary adventures?

Michael has well over 50 audio book titles currently available for purchase on Audible.com. He is versed in multiple styles and genres including fiction (novels and short stories) ranging from romance to science fiction to crime dramas to thrillers; business strategy books; health and wellness books; and even an occasional children's book.

Fans of Michael's narration are welcome to follow him on social media.

Angela utilized her Audible Romance Package subscription to access an audiobook copy of Turning 16 (Sam Dorsey and Gay Popcorn #1) by Perie Wolford & Michelle Doering, narrated by Michael Pauley to listen to and review for this post.
Posted by Wicked Reads at 12:53 PM