Lady Kate, the entitled eldest.
Lady Grace, lost in the middle and wishing she were braver.
Lady Lizzy, so endlessly sunny, it’s easy to underestimate her.

Upstairs! Downstairs! Toss in some farmers and villagers!

None of them ever expected to work together for any reason.

But none of them had ever seen anything like this. 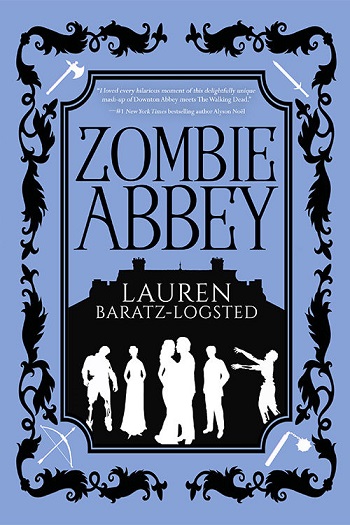 Erica – ☆☆☆☆
I'm trying to be careful to create a spoiler-free review.

To be honest, I wasn't sure what to expect when I began Zombie Abbey – zombies have never been of interest to me, but young adult and historical surely is. With a paranormal take on Downton Abbey and Pride & Prejudice, I had to see where this would go.

The story takes place during the 1920s, featuring an upper-crust, wealthy family in England. The narration was a bit of an issue with me – with so many narrators, it was difficult to form an emotional connection with specific characters, where you're rooting for/against them. However, this did help set the scene, offering multiple perspectives to create a well-rounded story.

The Clarke sisters showed the perspective of girls in the era, while the staff showed a view historical novels don't necessarily showcase. So, in a way, the many points-of-view did paint an entire picture, even at the expense of an emotional attachment.

The pacing starts slow, not truly hooking me. But I soldiered forth, mostly because this era intrigues me, and I was curious to see where this would lead. The pacing shifts to hyper-fast with action, making the last portion a page-turner.

I found unexpected humor in the actions/reaction of the narrators in regards to the 'zombie' situation. Maybe because I'm a jaded adult, but the horror portions, while gruesome, were horror-lite. This isn't necessarily a bad thing in my opinion, and this is where I found humor where some might not.

Overall, I'm still not a zombie fan, but I found enjoyment via the cast of characters and their interactions with one another. Oddly, I will say this was a fast yet fun book to read.

While I believe this to be a standalone, the ending does leave wiggle room for a future installment. However, if this truly is a standalone novel, the ending could have been tightened up a bit.

Young Adult age-range: 14+ due to the gruesome nature of zombies.

Lauren Baratz-Logsted is the author of over 30 books for adults, teens and children, which have been published in 15 countries. Before becoming a writer, she was an independent bookseller (11 years), a Publishers Weekly reviewer (292 titles); a freelance editor, a sort-of librarian, and a window washer. She lives in CT with her husband, daughter and cat. Lauren prefers the nobility to zombies, as a rule, and so long as you’re not the latter, you’re welcome to visit her website.

Reviewers on the Wicked Reads Review Team were provided a free copy of Zombie Abbey by Lauren Baratz-Logsted to read and review.
Posted by Wicked Reads at 10:01 AM