That’s the amount of time until Lezah’s execution.

She’ll die never knowing what got her locked up in that godforsaken prison in the first place. Her only chance of survival is to escape. Except the monitoring bracelet that digs into her wrist, the roaming AI, and the implant in her neck make freedom close to impossible.

Her best chance is to team up with the four other inmates who are determined to break out, even if one of them is beyond gorgeous annoying—oh, and in for murder. But he has a secret of his own. One that could break Lezah if she finds out, but could also set him free.

Figuring out how to work with him and the rest of this mismatched group of criminals is the only way Lezah will survive to see the outside world again.

But nothing in this prison is as it seems. And no one. 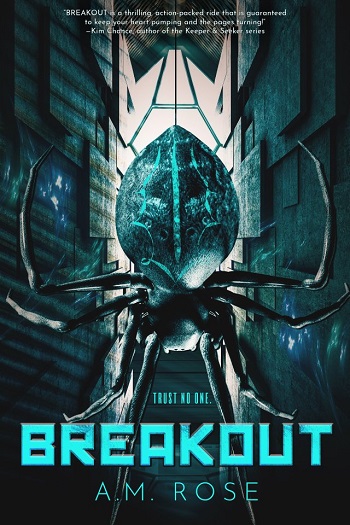 Erica – ☆☆☆☆
A.M. Rose is a new-to-me author, and I'm curious to read more in the future. Breakout is not listed as the debut in a series, however, I hope there is more to come to answer many threads left untied.

Breakout starts with some confusion, because the narrator doesn't know where she is, why she's there, how she got there, with a large portion of her recent memory blank. Held prisoner, the world-building is futuristic, science fiction, a dystopian vibe.

Lezah is confined in a facility, and she has no idea why, only a countdown timer on her bracelet, counting down to what she assumes is her end. With only three days left, Lezah finds a way to attempt escape, along the way picking up four others.

Rapid pacing, nonstop action, Breakout has a Maze Runner and Hunger Games vibe, mixed with a sense of virtual reality of a live-action video game. There was an addictive, page-turner need for answers, which had me on the edge of my seat, but those answers were given as if the reader should just understand/know what the narrator does without it being on the pages.

Along the escape journey, Lezah's memory returns slowly, as she fits the pieces as to how she came to be imprisoned with these specific people. The returned memories are as murky once returned as they were when Lezah struggled to remember – piecemeal, barely fitting anything together.

While I feverishly read the novel, needing to know what happened next, I wanted answers to many questions. It felt as if plots didn't quite fit together, as Lezah rushed along, taking the reader on the journey with her.

At the end of the novel, I'm still not quite sure why everything that happened happened, with a quick resolution that was too easy. The easiest resolution I've ever read, to be honest. There needs to be a sequel to offer a real resolution/explanation. Lezah jumped from A, automatically assuming Q was the answer to whatever question was posed, yet the reader had no idea what B through P were to get to that Q conclusion.

While the pacing was rapid, which kept me engaged and entertained, it was at the detriment of the world-building, character building, and the who/what/where/why/how/when. Reminding me of a plot outline, where the writer is to fill in the gaps to enrich the experience.

With all that being said, I enjoyed the novel, definitely recommend to those who love this genre, and am looking forward to more from this author in the future.


Shelby – ☆☆☆☆☆
Breakout was an exciting, young adult, sci-fi read! My attention was grabbed from the beginning. We follow a young lady, imprisoned with no memory of committing a crime. Fear gripped me, but I had to know what was going on. This future world is a strange place, where computers walk amongst men and fear dominates all.

When Lezah and her cellmate agree that they need to breakout before their death-date of four days and one day respectively, I was totally on-board. The insanity that follows is best left unsaid, so you get the full impact!

So many questions arise with no resolution. Lezah doesn't really know who she is, she only remembers bits and pieces of her family. Her rag-tag group of escapees all have their own lives, but they seem to remember things. Are these people trustworthy? Are they good guys or bad?

I just couldn't put this down, I was on the edge of my seat throughout the story, and hope there will be a book two. I enjoyed the ending, but there are still questions that need answers. I will be adding A.M. Rose to my list of authors to read!

A.M. Rose holds a Bachelor of Arts degree in Communication from San Diego State University, is a member of SCBWI, RWA, NJWR and YARWA. She participates in several writing groups and is co-founder of All Write by Us, an online YA writing/critique group.

Reviewers on the Wicked Reads Review Team were provided a free copy of Breakout by A.M. Rose to read and review.
Posted by Wicked Reads at 6:59 AM